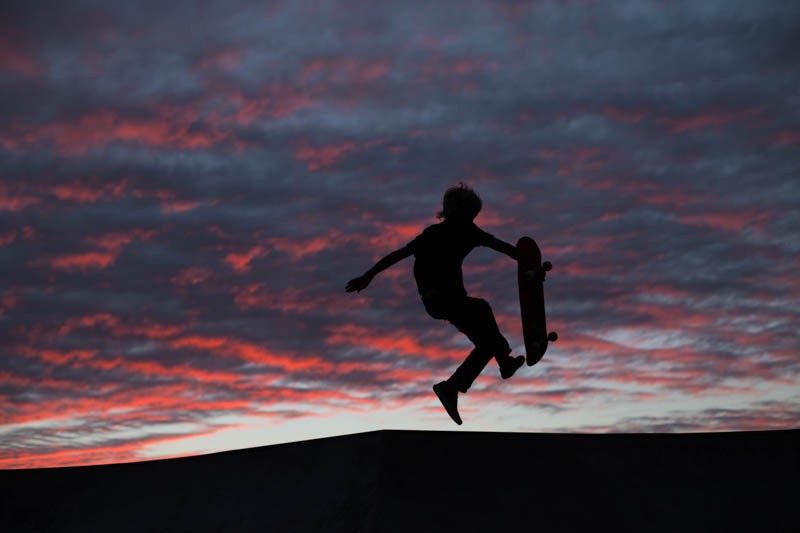 For those of you that have followed my blog for a while…(bless your hearts,) you’ve heard more than one mention of The Great Skate Park Project.

It’s been in the works for an eternity.  Or at least a year or two.  I’m not sure, but it’s been a long time.
Dave started thinking, and dreaming, and designing a skate bowl for our family, all on his own.  I showed somewhere between little-and-no interest, so this was his baby, 100%.
Here were his plans:  He carried them around for many months. 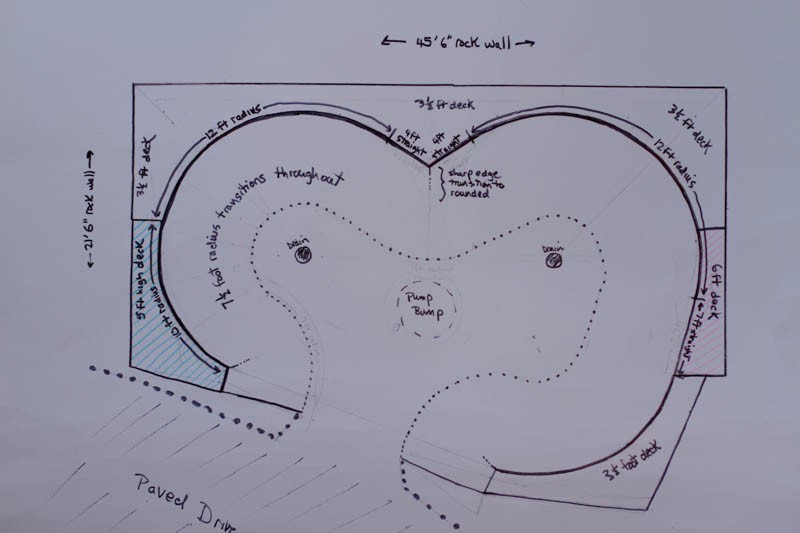 Dave hired some big Tongan men to build the rock wall last summer, (while I grumbled quietly,) and then made all of the complicated arrangements to fly three guys over from Dreamworld Skate parks in Oregon this January.  There was a lot to coordinate, and the best way to do this would be for them to stay in our house while they built the park. (and then my grumbling became a little less quiet.)

Please understand:  We have a lovely home, but I do have a few projects on my “hope to do one day” list.  Our windows are ancient and need replacing.  There’s a little (big) kitchen project we dream of doing.  So a full-on skate park seemed a little less than high priority to me at this time.

So I shared this “BEFORE” picture here on the blog, and then I flew to California to be with girlfriends.  And while I was away, the girls reminded me about things like being a good wife and mom, and encouraged me to get over my little bad self.

So I came back and we all survived and…This is probably a good time to make a public statement:  DAVE NAILED IT.  He absolutely nailed it.
And I?…I’m really glad he didn’t let my grumbles get in the way.

He planned things so well.  Yes, it was an inconvenience.  And messy.  But the guys?  They were gems!  Sweet, hard working, gentlemen.

And the park?   It blows my mind!  It is the coolest thing ever, and Dave is officially the coolest dad ever. 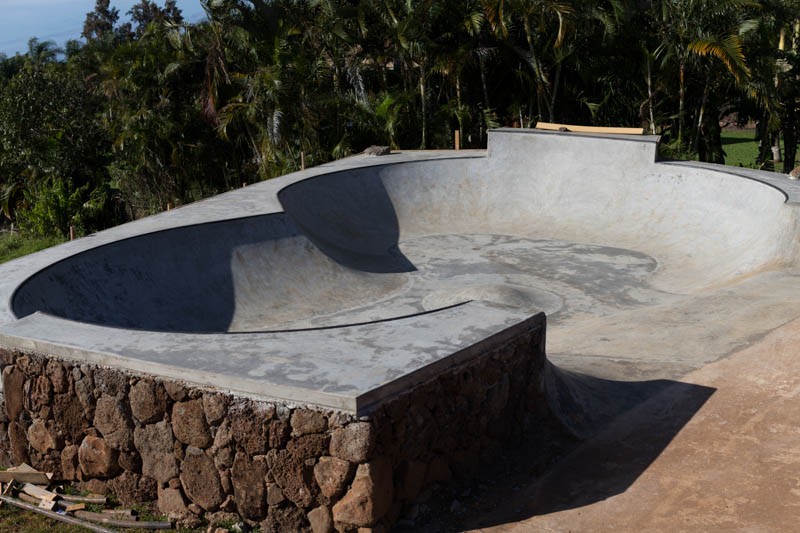 But,  just for fun…In case there are a few skate park junkies out there (Or maybe you should call the men to gather round…) here’s the photo-journal step-by-step of the skate-park building process.  (If your eyes just glazed over I don’t blame you one iota.  See ya next time!)

For anyone hanging in there–Here we go:

Since the rock wall was built last summer, Dave has spent countless hours out there.  I can’t tell you exactly what he did, but there were machines involved and I’m pretty sure it was all about packing the dirt…measuring angles, creating drains…and a daily dose of Dave staring at the ground (anyone who knows him knows what I mean,) doing mathematical calculations in his brain or something way beyond me.
(As my mom would say, He’s one of them smart geniuses.) 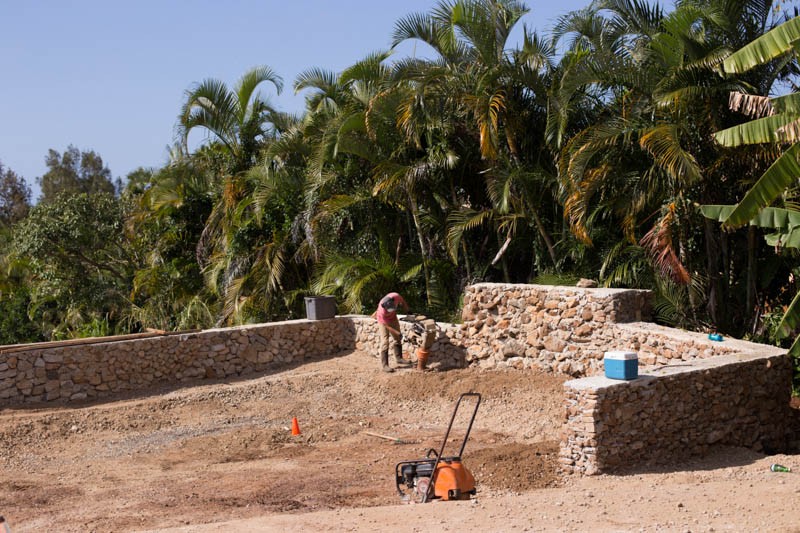 Finally in mid-January, Burke, the first of the Dreamland crew, showed up.  He and Dave went to work…(Dave planned for this to fall during his two weeks off of work.)
Their first week was all about building forms, and shaping the park, and moving dirt, and stressing about how there may be a concrete shortage (seriously) (we live on an island,) and how it was forecast to rain the next week, and how that would be terrible…etc.
Neither of them slept much that week.
Before the sun was up they were both wandering the house, and pacing outside in the dark.  (Burke, due to jet lag, Dave due to nerves.)
We went through a lot of coffee that week.
We prayed a lot too. 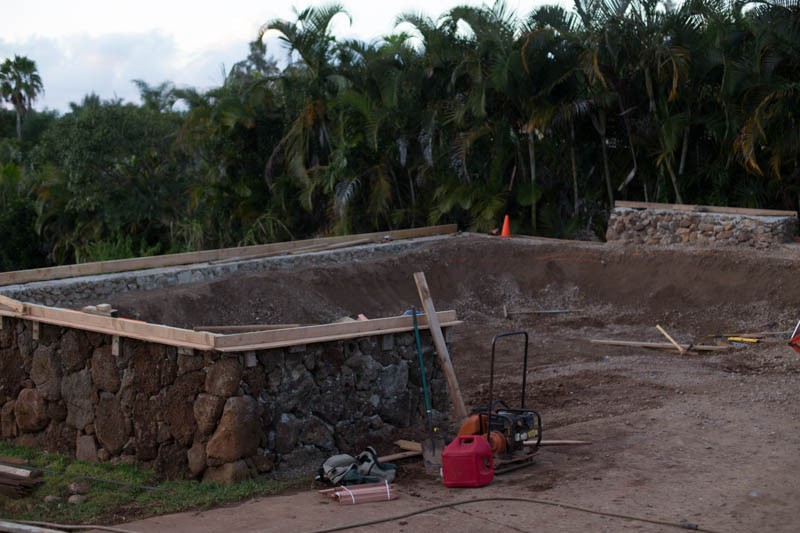 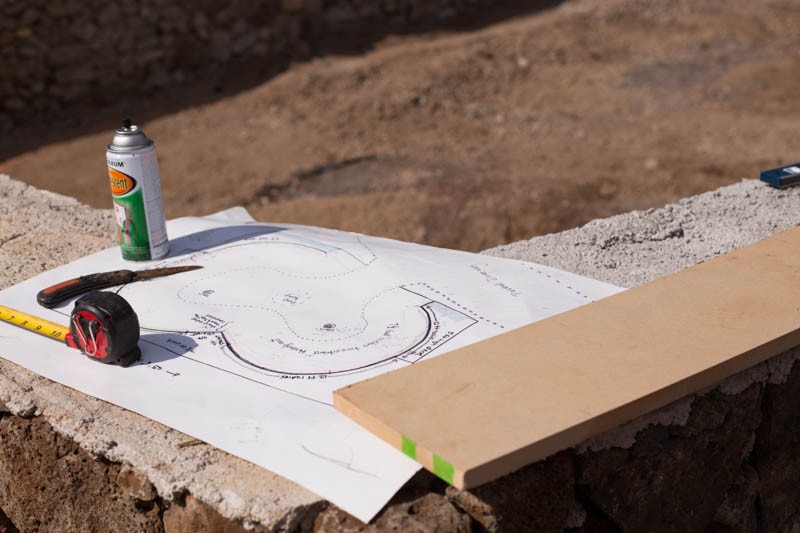 Thankfully, they had some willing help. 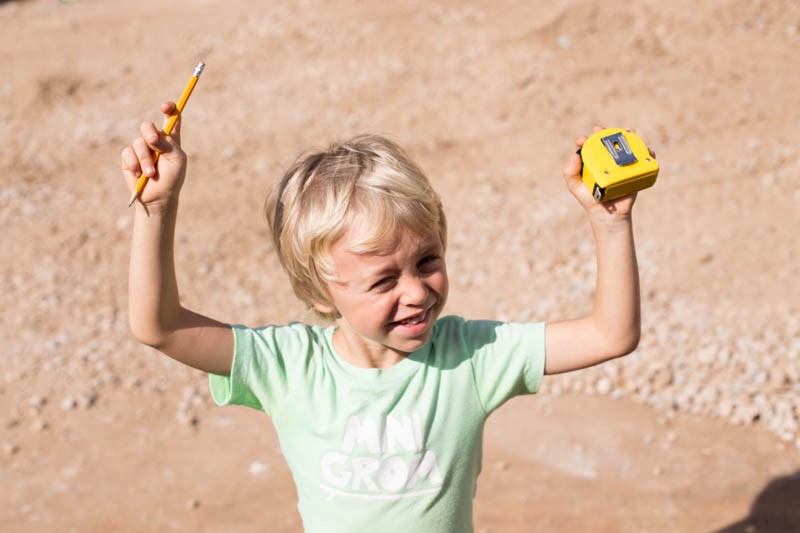 Then the other two guys from Dreamland showed up.  Skip and Aaron.  They had never been to Hawaii before, and we basically said, “Well enjoy the  ocean view from up here.  Now get to work.”  haha.   They seriously worked from sunrise to sunset.  In fact, the day they arrived, they worked hours with their luggage sitting in our driveway before they even entered the house.  (I felt bad about that.)

Get this:  They worked during the Super Bowl. 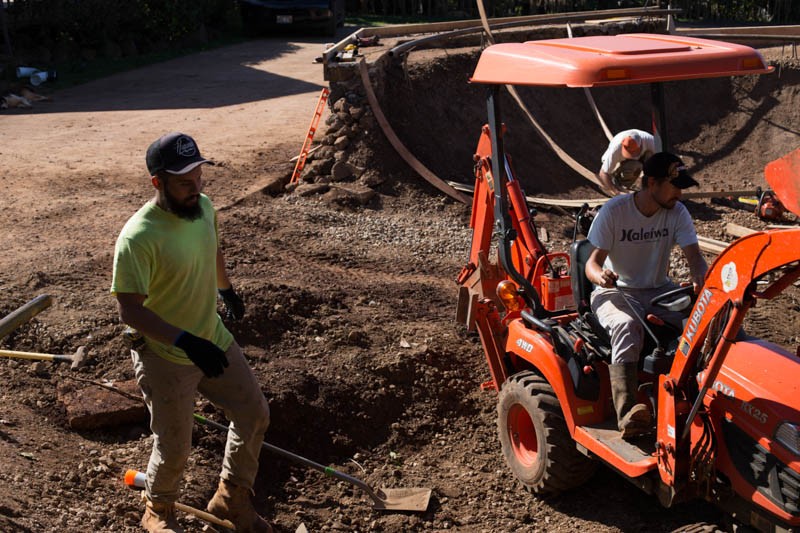 We also had a few local guys in on the job. 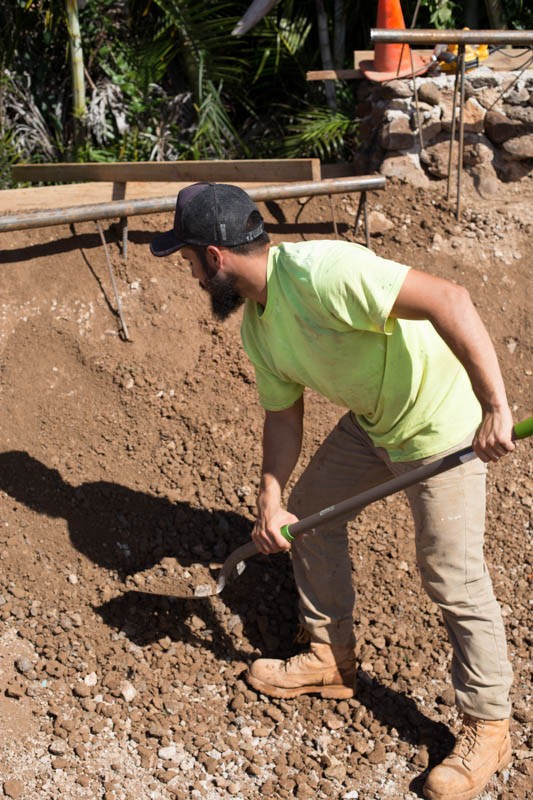 They all worked hard.
And they didn’t talk much.
And I pondered how it is that people could work so hard and talk so little.  And I concluded that I wouldn’t be cut out for that kind of work.   It’s just not natural.

PS  Notice our lovely grassy yard in the background, below?  Remember what it used to look like?
Can you even believe?  Someone tell me you shed a little tear for that.
(Dave promises it will all grow in quickly.) 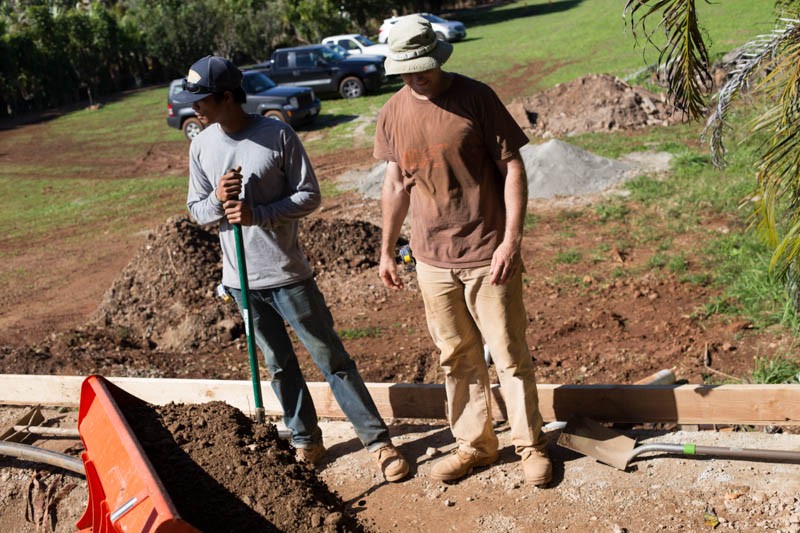 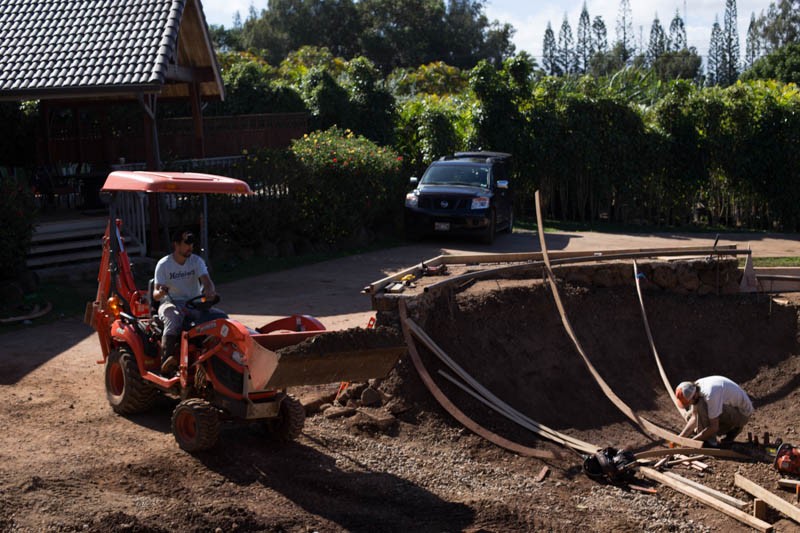 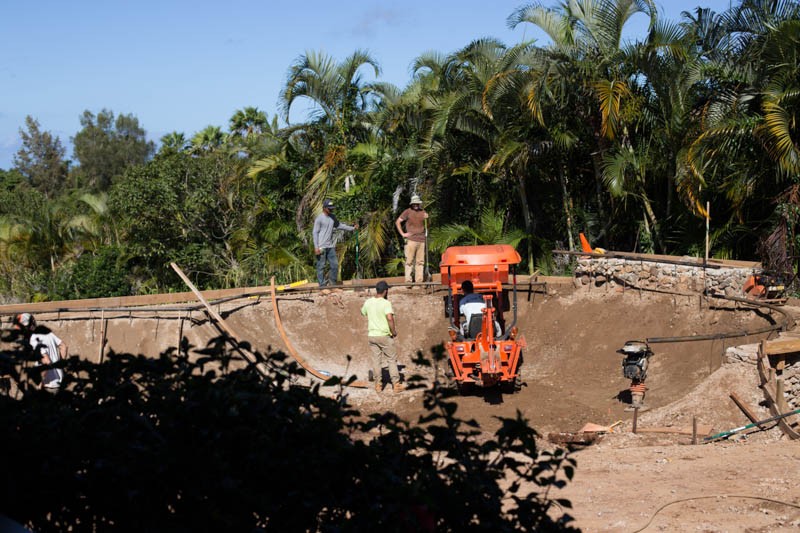 Finally, though the forecast called for rain,..The weather was perfect.  (God answers prayers.)

We had multiple concrete pours. 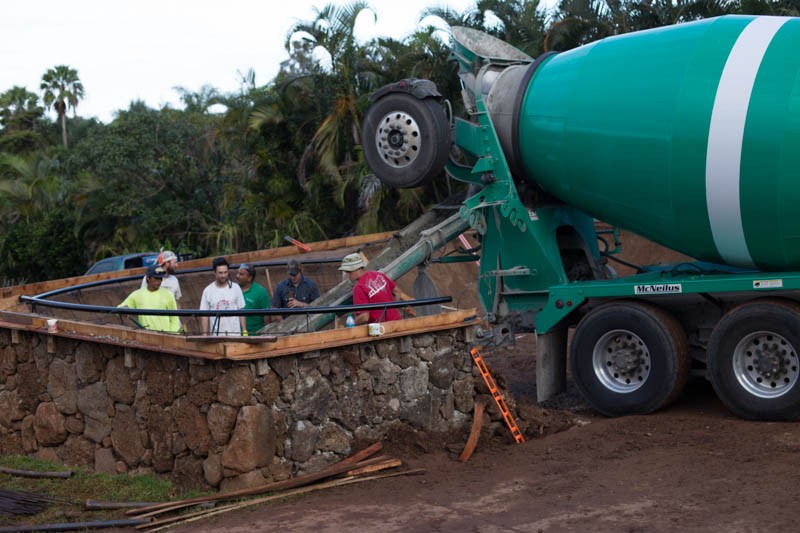 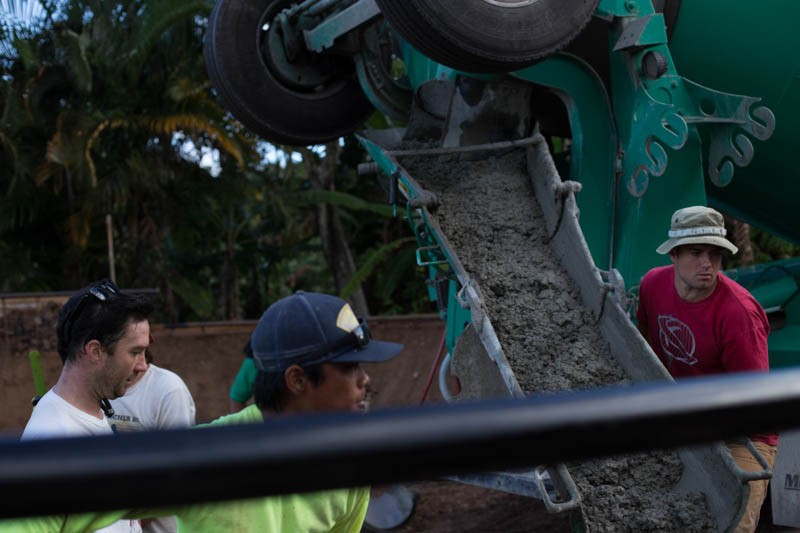 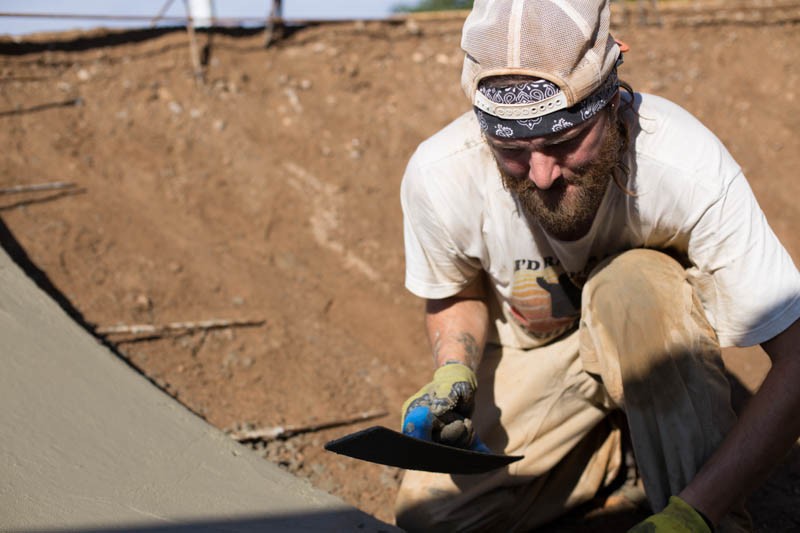 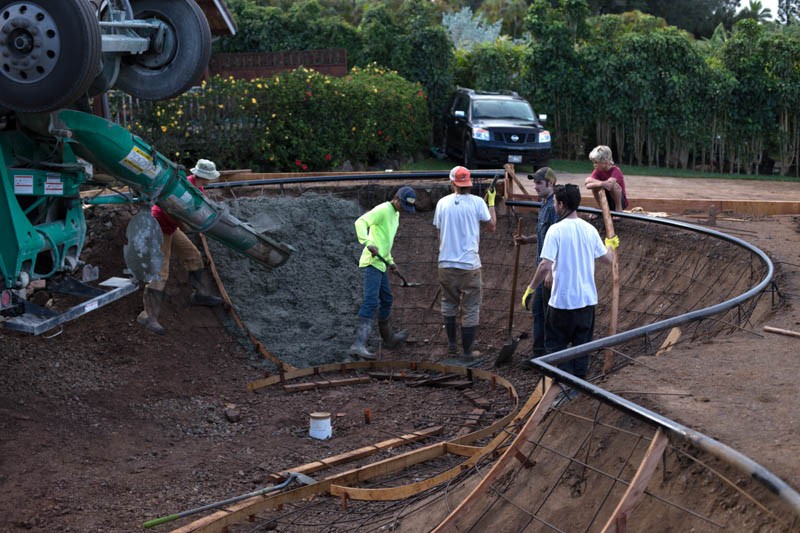 I instagrammed Dave being dirty and rugged, because that might have been my favorite part of the project.
Until I did eighty loads of laundry.   And still found concrete in his underwear. 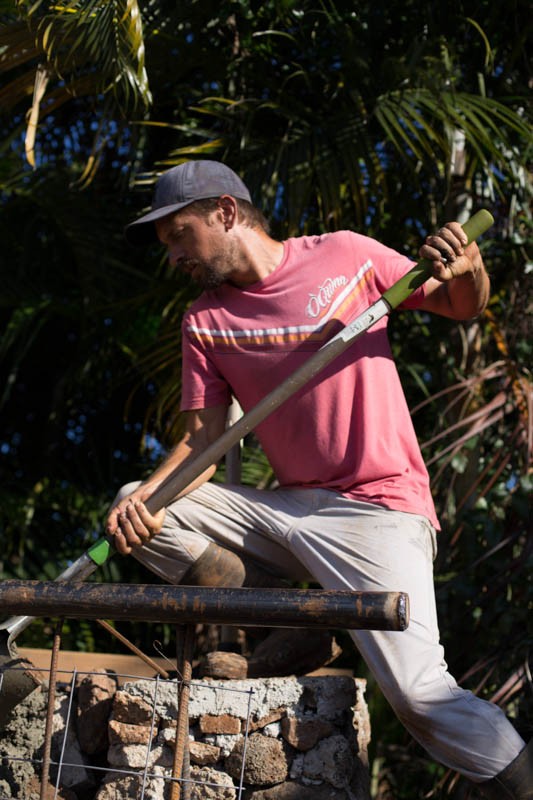 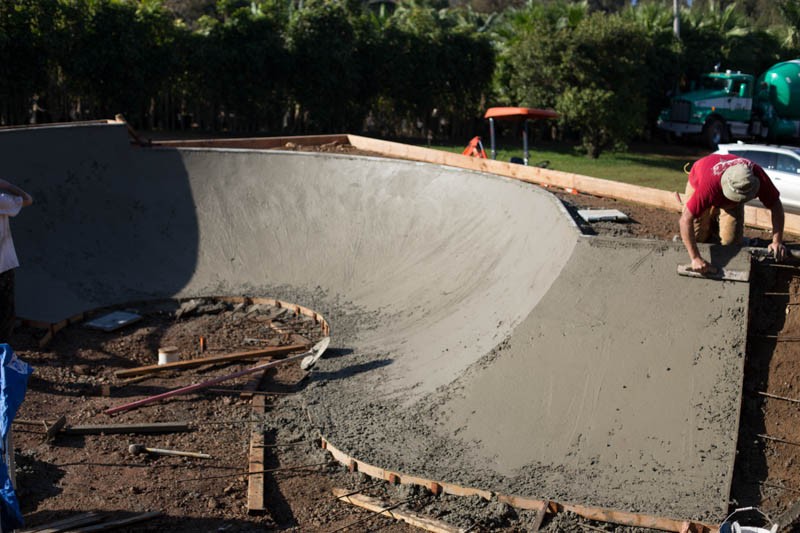 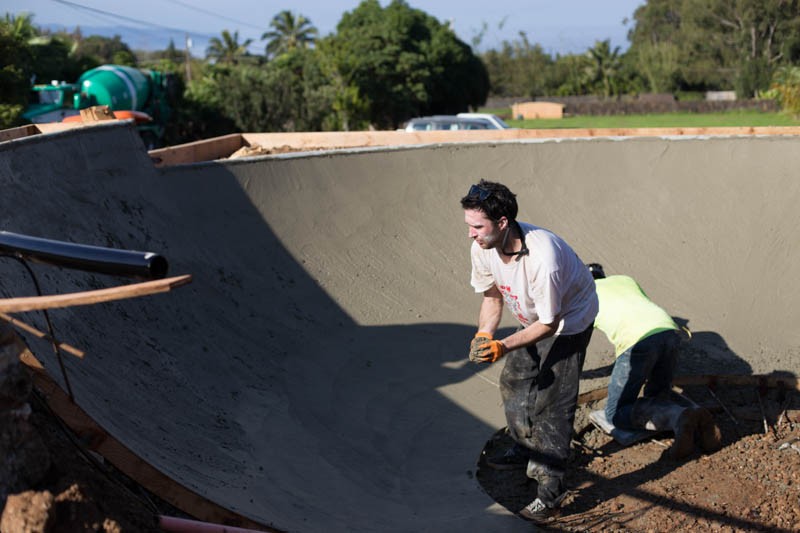 Somehow,  over the next few days, things came together… 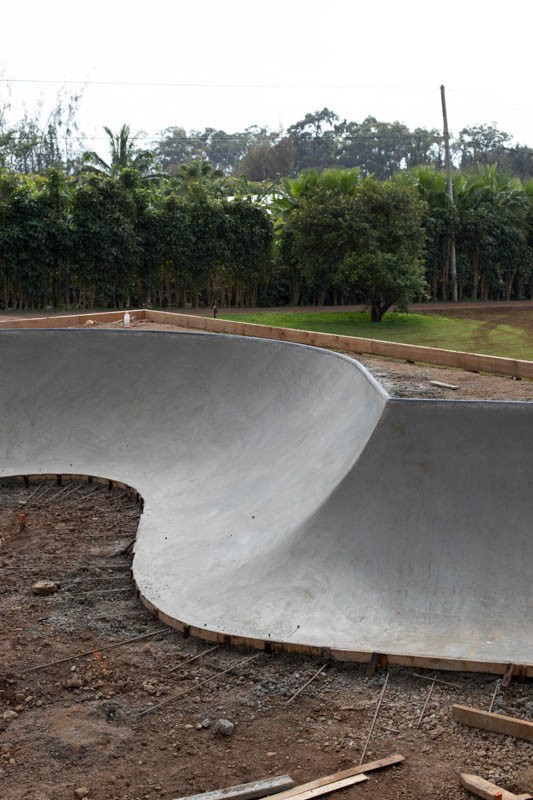 And then all of the sudden…It was complete.
And though the boys were frothing to jump in…the workers said they had to “WAIT THREE DAYS.” 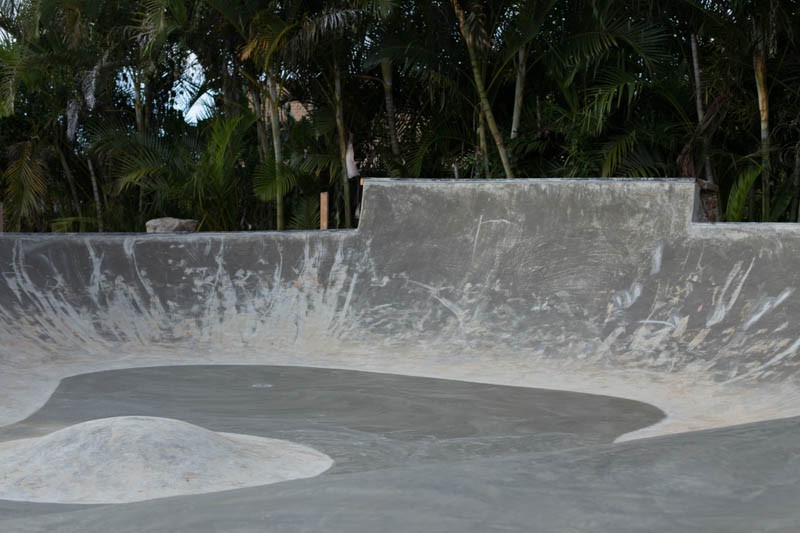 Until they remembered that they had to fly back to Oregon in “THREE DAYS.”
SO they said, “OK, TWO DAYS!”
And the skate park builders became the skate park riders. 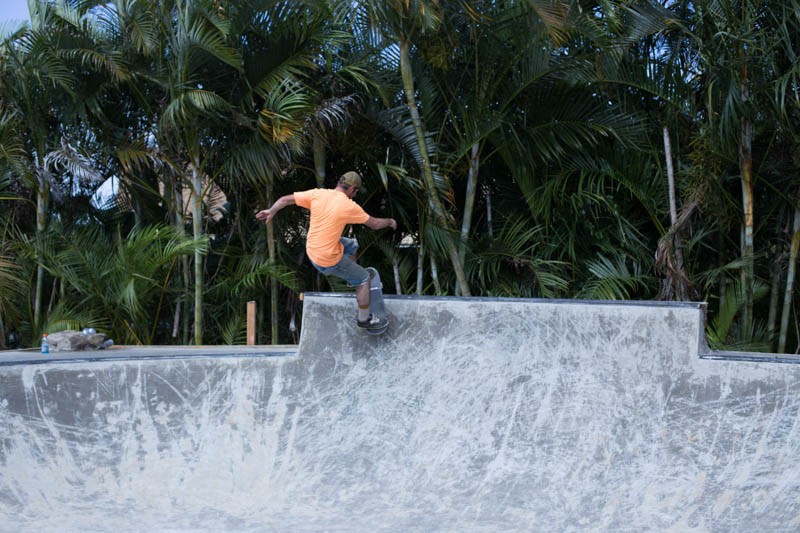 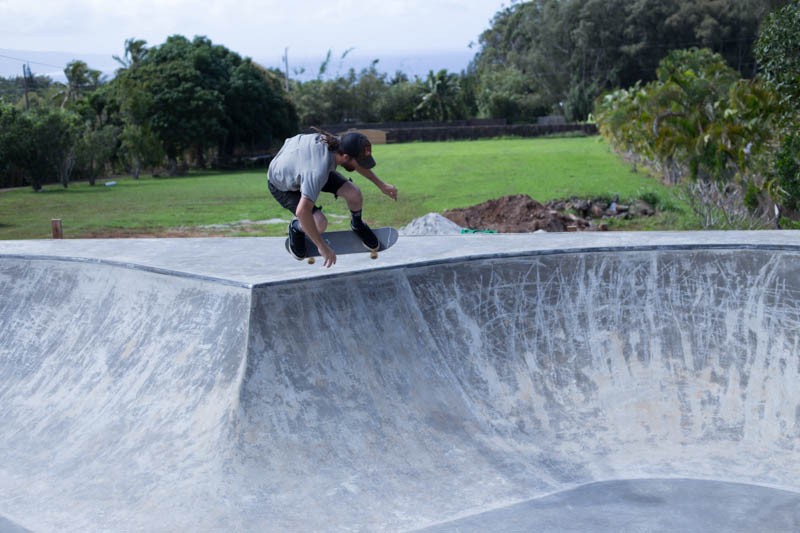 Obviously Luke waited all of about two minutes to get in there with them. 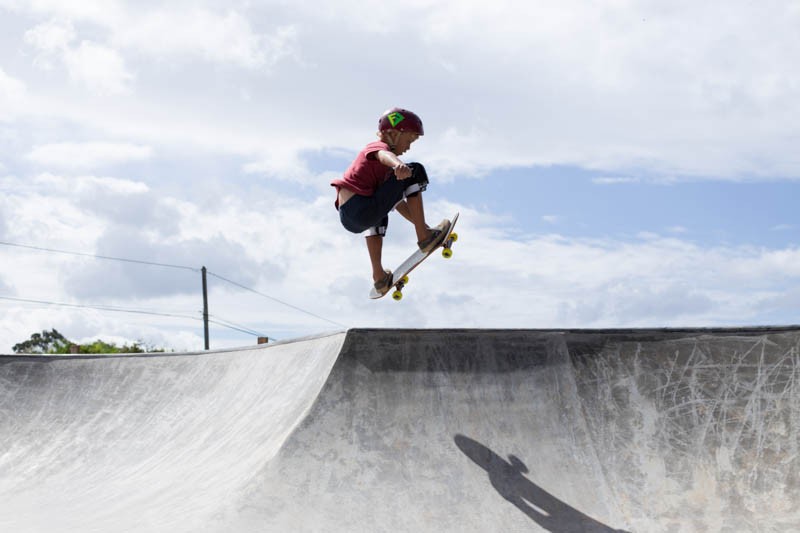 The boys were speechless.
Dave was so happy.

And we all sat down to dinner, and got a little choked up knowing they were leaving because this project was somehow a very bonding experience for everyone.  (Probably especially for those who were actually working, not just sitting and watching and pondering all of the working.)

And then Dave took them to the airport, and I sat home feeling kind of sad that it was all over.

Because clearly I have issues.

And there ends the story of the Great Skate Park Project.

PS  A big Mahalo to the guys from Dreamland Skate Parks.  Well done guys.  (And Levi really misses you.)
PPS  In the opening photo, I realize Luke is not wearing a helmet.  He already got grounded for a month (not really,) but I promise that is not normal, and we do not want to set a bad example to anyone.  ALL of the boys wear helmets ALWAYS and that was just a weird fluke.  (but a really fun photo. :))  Thanks for understanding and not lecturing me on helmet safety.

THE JEWELRY WINNER WAS LYN…Congratulations!!  I already emailed her, but wanted to say THANK YOU SO MUCH to all of you for the amazing comments.  I just fell even more in love with all of you (and met some new friends too–yay!) through hearing your sweet hearts in the comments.  BONUS!—  Visit Kaleimaeole’s ETSY shop and use coupon code “BEMYVALENTINE” to get 15% off until Valentine’s Day!  Big thanks to Kalei for sharing the jewelry giveaway!  XO