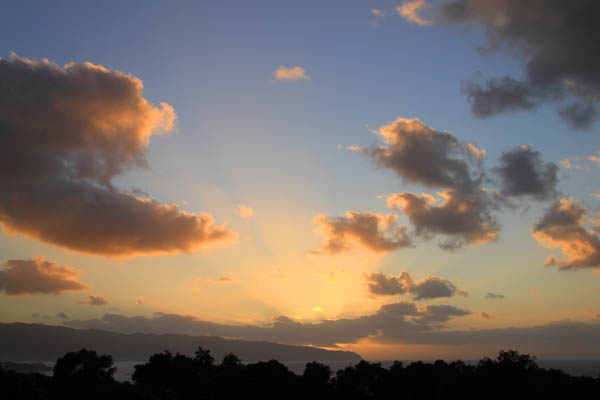 Just before I went to bed last night, Josiah ran out to get a book he had left in the car…He came in and said, “Hey Mom, you can really hear the waves out there.  Wanna come out and hear them”

I wrapped myself in a blanket (because YES–58 degrees last night!) and walked out.  We stood on the lanai, Josiah and I, under the stars and very still, as we listened to the rumbling waves.  At first it was just a general sound, of waves on top of waves.  But we both waited, knowing that Shark’s Cove is right below us, and when the BIG ones come, we would hear that especially loud “Boom!”  As we waited, I pulled my boy close.  He wasn’t wearing a shirt even, out in the cold, and he isn’t a boy anymore either.  I wrapped my blanket around him and he felt big, and strong.  Taller than me by inches now, he stood like a man. 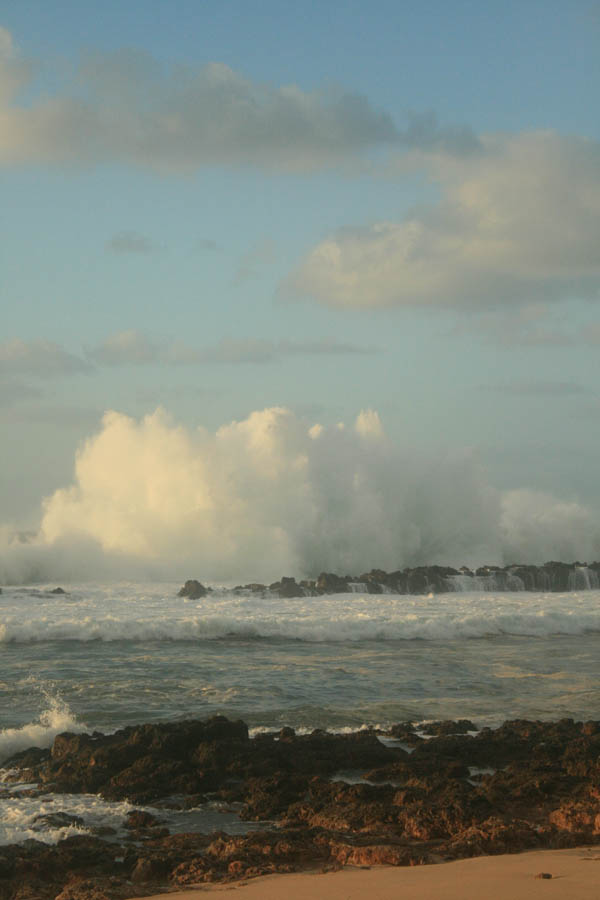 As we stood listening to the waves, I blinked back tears.  Suddenly the only thought on my mind was “Not much longer.”  He’s fourteen now, but how quickly will these next years go?  It hurts to think like that. 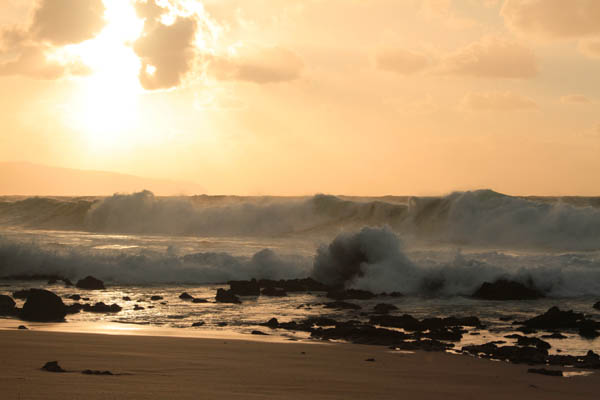 We heard a few big booms, and I told him I loved him.  He smiled that genuine, warm smile of his, (oh some girl will have such a prize in this man one day…) and then we both went off to get some rest.   Yet I awoke this morning with only more thoughts…Thoughts of time, and parenting…And the questions, they can mock me:  “Have I said enough?”  “Have I listened well?”  “Do I speak words of encouragement as much as words of criticism?”  I sat over my coffee and just gave myself a minute to remember each kid at various ages and stages, and then panic would hit as I thought, “Wait–I can’t imagine Josiah at NINE!”  or “What WAS Jonah like as a five-year-old?”  I know we moms can be sentimental like that,  but I also really truly don’t want to let it slip away.  I want to know them all so well….to enjoy them so deeply…that when they are big and grown, I can say with satisfaction “I have given my all, and they are ready.  We are all ready.” 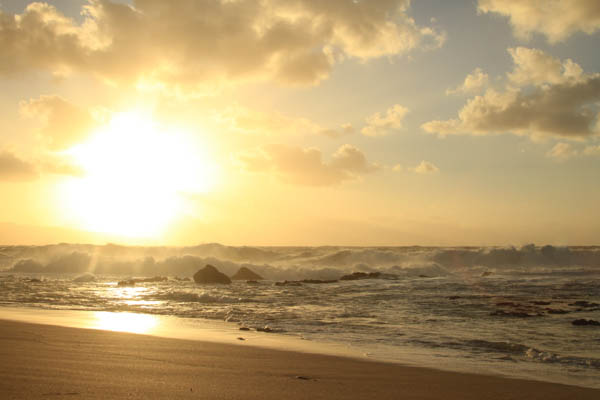 I am quick to get irritated with little Levi.  I call him rascal, and naughty, and (sometimes it’s so true, but) he is so much more.  His teachers adore him, and I’ve never had a complaint from anyone (outside the family :)) about him.  He is witty, and charming, and sometimes even sweet.  Yet there are times that I find myself wishing him to be bigger.  When he tugs on me just a little too much, and I hear the word “MOM” for the 8 gazillionth time in a day, I can wish the moments away.

But yesterday, three times I stooped down and looked in his eyes and just thanked him..for being a good boy at school.  For obeying.  And I hugged held him and told him that HE IS A BLESSING.  And I meant it with every fiber of my being.

I need more of that.  The stooping.  The speaking life.  The taking-the-time to build up, and pour into of each of my boys.  Levi may be three, but in the blink of an eye he too will be fourteen, and full of muscles, and standing on the lanai with me listening to waves while I fall apart a little on the inside.  Or I hope he will…

Because it is the bonding and building that happens now–at three, and at nine, and at twelve…that will establish the kind of relationship that would make a fourteen year old ask his mom to stand with him and listen to the waves on a cold night. 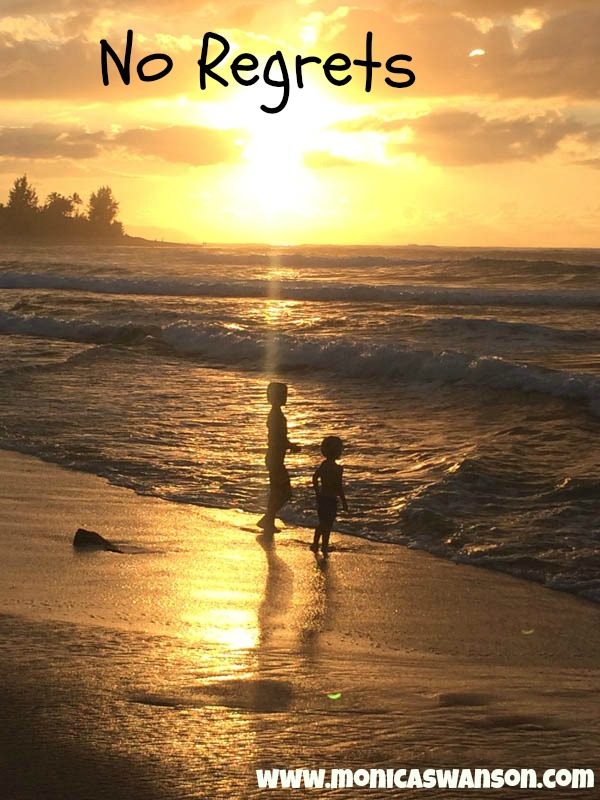 It isn’t easy guys.  As parents, we are busy, and whether we have one or four or twelve of them–young kids  seem to never get enough of us.  When they’re little, they want ALLOFUS, ALLOFTHETIME, and sometimes the easiest thing to do is to tune out.  I’m ashamed to say it, but it’s true.  It’s almost like if I can’t give them all of me, then I’d rather just walk away.  Fold some laundry.  Look at Facebook.  Pass the time.  Because sometimes the noise and the being pulled on just so much is just….too…much.

But as I sit and type with tears literally streaming down my cheeks, I know so well that there is nothing (NOTHING!) more important, valuable, or worth my time than TUNING in to my children.  The three-year-old silly stories…the nine-year old, the twelve year-old, and the fourteen-year-old.

I don’t want to regret a thing. 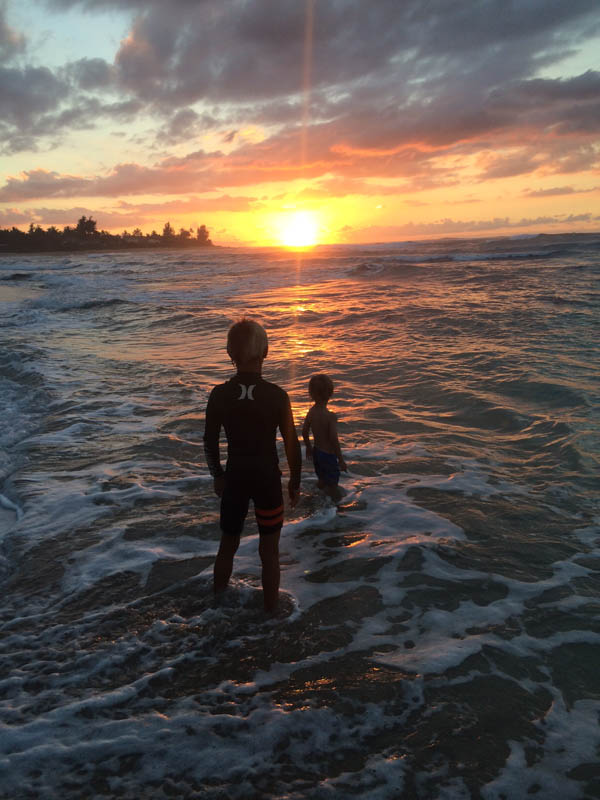 XO
Monica
PS  If this post has encouraged you, please consider sharing it!