Christmas is…Ummmm– One week away! 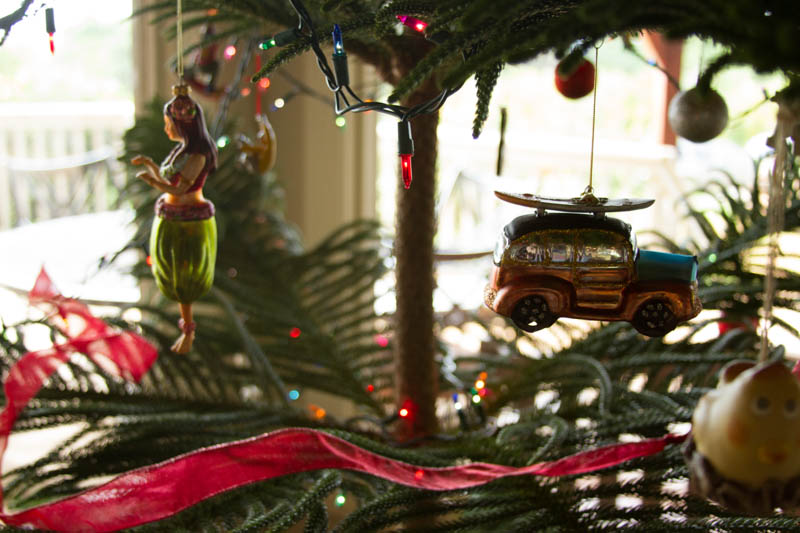 Though I had a lot of ideas about giveaways and advent thoughts, and filling this blog with beautiful things this season, I ended up instead with a lot of guests, and busy days, and exciting things (and then that nasty cold.)  S0 I made some choices to let a few of my plans go.

This has turned out to be good for me after all, and I’ve spent some time thinking about this season and how I want to spend it.  I plan to come back in a day or two to talk more about all of that.

But first, this little story just happened, and I guess it seems to lay a foundation for what I’m going to talk more about.  Even if now that I go back and read it I think it is on the cheesy side, and Dave suggested it would be good in a Guidepost magazine (which–does anyone read that anymore because my grandma used to and now my mom and I still do.)  I wasn’t going for cheesy here, it’s actually just a true story. 🙂

It all began with Levi and some bright and shiny boxes… 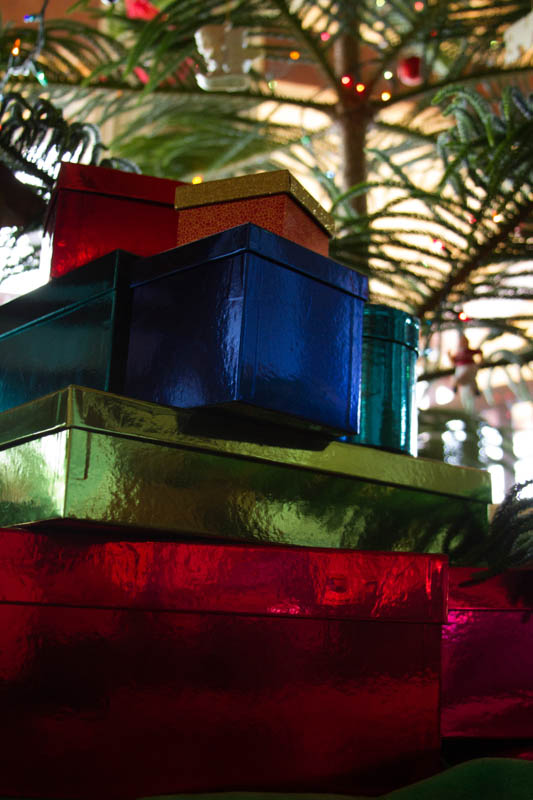 There were 16 gift boxes in all, and I found them at Costco, all nested one inside the other.  I was quite excited because 16 gift boxes meant 16 less gifts that needed to be wrapped, and this was definitely a one-up from my usual gift-bag tradition.

Well when Levi, my four year-old, saw the brightly colored boxes, his eyes lit up with excitement. 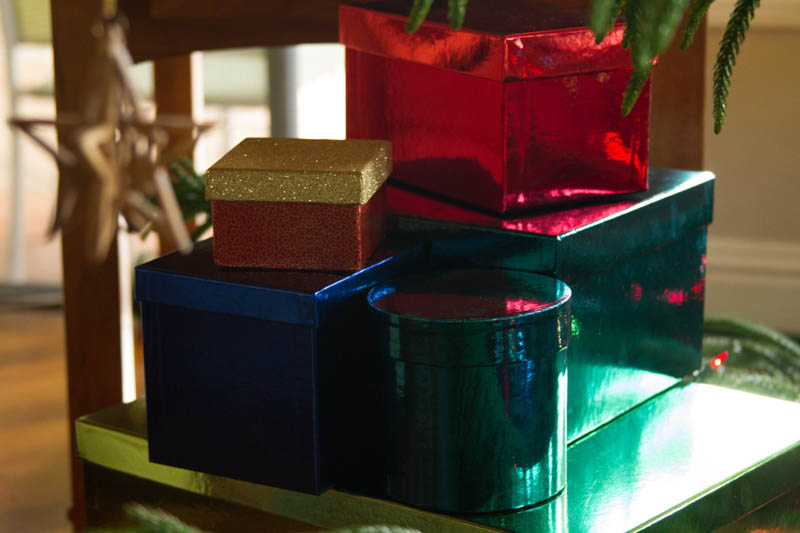 Now–if I had been thinking at all, I would have just stuck the whole set under the tree with Levi’s name on it because let’s be honest–there may be no better gift for a four year-old than a huge set of boxes within boxes within boxes.

But instead, I brought those shiny boxes in the house and had one thing to say to my curious four year-old: “Don’t touch these. I’ll be using them to wrap presents later.”  As if that would do anything other than intensify his determination to get his hands on those boxes.

So a few days went by and Levi began asking…”Can I play with just one box Mommy?” And eventually I started to get weak. “Ok–play with one box, but please put it back when you’re done.  I need to use them!” Before long there were two and then three of the shiny boxes under the tree…or in the hallway, all over the house–stacked this way and that.

Then yesterday, while the other boys were out surfing, Levi and I stayed home so that I could get some things done.  (Obvious note to self:  Being home alone with Levi is not ever a time to “get things done.”)  But I was on a mission to get my Christmas cards addressed, so I told Levi that I just had to print my address labels, and can he please play quietly on his own for a few minutes?   I had been gone shopping all day, then I had been on my phone a few times, and I knew he wanted my attention, but I had cards that needed labels.   And Christmas wouldn’t wait for me, or Levi.

After a few minutes of wrestling with Avery #5160 printer labels, my frustration grew.  They were all printing wrong, and I just wasn’t in the mood for this.  My mind raced between everything I needed to do–piles of laundry, dishes in the sink, and some writing assignments I needed to finish.  Honestly, I was frustrated that Dave had left me with Levi, because I just wasn’t in the mood for him right then.

Soon a little angel-faced Levi snuck up next to me.  He quietly said “Can I play Santa, Mommy?”  Playing Santa could have meant a few things, but if I stopped to think for a second, I could have guessed that this would involve the forbidden boxes, and likely a huge mess.  But I was in denial I suppose, and anyone who has had the unfortunate experience of wrestling with printer labels that are not cooperating can understand why I sighed in surrender and said “Sure Sweety.  Go play Santa.”

Levi happily skipped away, and I was just glad for a few moments of peace as I heard him rummaging around, and hum and sing his latest version of Rudolph, (“and if you ever saw him-saw him–you would even say hello.” ) 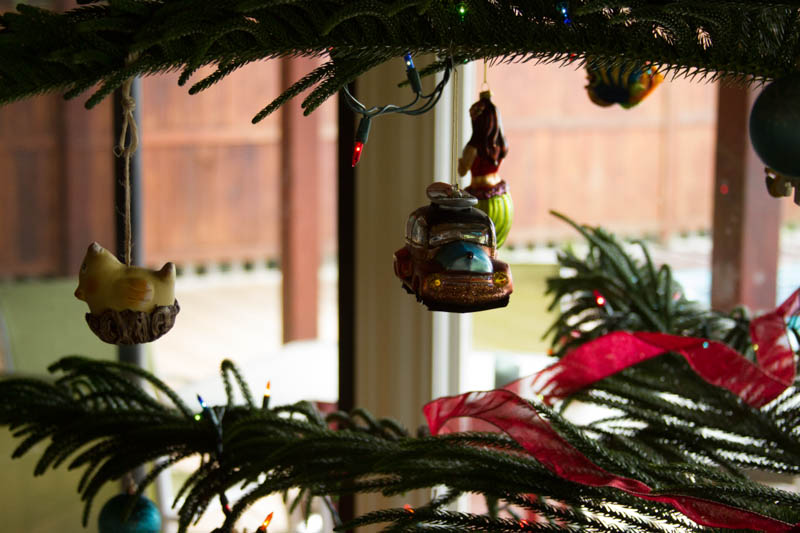 The final sheet of labels came out all wrong again, and I was mad.  (WHY does everything go wrong when you’re in a hurry!?)  I wanted so much to get to the next thing on my to-do list, but I had really not spent a good minute with Levi all day long, so I took a deep breath and turned to him and forced myself to say, “Ok, Mommy is done. I can play with you now,” something like a robot, while silently praying that I might gain some holiday perspective.  And a lot more patience.

Just then, I heard my cell phone ringing.  Levi looked up and smiled mischievously.  I was worried.  The sound of the phone came from the living room, but sounded very distant.  I asked, “Where is my phone!?” just as Levi ran to the Christmas tree, and to the pile of bright and shiny boxes which I just then realized were all (all sixteen)  tucked in this way and that, under the tree, and all around.  As quickly as his little toddler fingers could move, he threw open each box, to reveal the truth behind his quiet game of “playing Santa.”  I didn’t know whether to laugh or cry as I realized that each box was full–full of stuff from all over our house:   My necklace and Dad’s socks were in one.  A wooden spoon and a toothbrush in another.  There were old batteries with brother’s underwear, and a dollar bill with a candle in another.  We hadn’t even gotten to all of the boxes when the phone quit ringing.   I had to laugh remembering that I had just seconds before prayed for perspective. 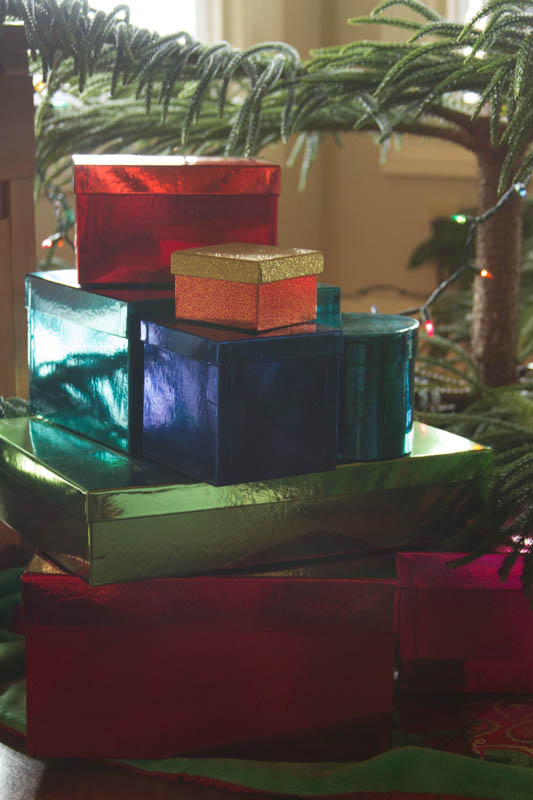 The phone began to ring again, and Levi and I, now laughing together hysterically, searched through the boxes until we came to the tiny one in the far corner, tucked under our little side table…and inside the box, just next to my lipstick, was the cell phone.  And a whole bunch of perspective.

Now whether Levi was trying to communicate something by choosing to stick my cell phone in the furthest box or not, I’m not sure, but I got the message.  And I gave that little guy a hug and a kiss, and at that very moment I promised myself that I would spend the next week being intentional about the holiday.  Not just talking about it, but doing it.

And then I mentally chucked my to-do list, and Levi and I set to work together wrapping presents for our family members in the bright and shiny boxes…I let him choose the labels and the ribbons, and place them all under the tree.

And later I listened as he told his dad “Today Mom and I had the best time in my lifetime.”

And though I’m slow to learn, I’m glad that I still have one week before Christmas to do things a little different.

See you soon with one more post full of deep (though hopefully not cheesy) thoughts.

PS  My sweet parents picked up new address labels for me at Walmart today and I printed them all out tonight…After everyone had gone to bed. 😉 Yay for happy endings!
PPS  For more sentimental warm fuzzies…Try this post. 😉

A little snippet from the audio version of #raisin

A snapshot from the holidays when @josiahswanson a

Teens today are facing issues we could never have