First of all–sorry if you tried to visit this place Sunday and found the blog MIA!  I have no idea what happened.  I tried not to panic, but it did last most of the day.  By the time I checked back, it was all here again (thank God!) but that left me no time to finish the post that I had planned for Monday.  So, I am quickly editing the recipe I thought I would share on Tuesday.

But now that I think about it–Manicotti Monday?   It does have a  nice ring to it! 🙂

Since our relatively cool temps are quickly fading away and the hot, stickier days are starting to bust in–I want to hurry and share a couple recipes that I’ve made recently that are all about warmth and comfort.  Manicotti, being a recent favorite. 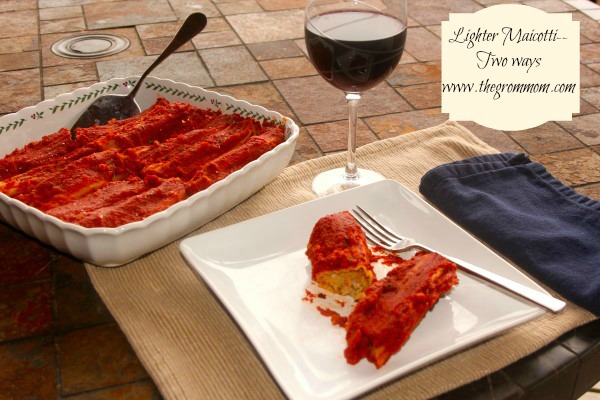 I made it twice in one week, and here’s why:
I wanted to find out if I could cheat on the noodles.
Like I do with lasagna.
Which makes me now wonder if other people cheat on their lasagna noodles?

You see, my mom is the best cook I know, so I follow her ways long before I’ll follow a cookbook.  That would explain why I still call her at least twice a week with cooking questions.   Anyways, my mom taught me to make lasagna with hard noodles.  Like, noodles that have not been boiled.  Is this normal?

Well, I’ve always made my lasagna my mom’s way, and it has always worked out perfectly.  I have always felt a little sneaky though, like I had the secret of the century and maybe I shouldn’t tell anyone.  But I never questioned it.  Until I started to make this manicotti, which brings us back to…

The manicotti:  I figured if lasagna turns out just fine without pre-boiling, then surely manicotti would too.
So, I called Mom, who said YES, she was pretty sure that you could get by with that.  Just be sure to add a little extra sauce, and cook a little longer and at a lower temp.
So I did! 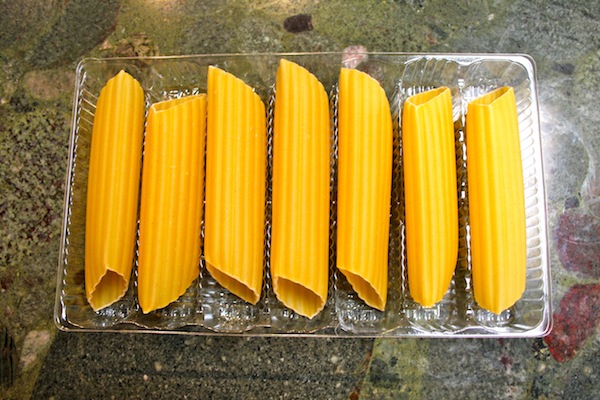 I took these here hard shells, and I stuffed them with a ground turkey, parmesan cheese, bread crumb, egg, and oat mixture.  Oh yeah, and kale.  Because I stick that stuff into almost everything.
It’s good for you, ya know. 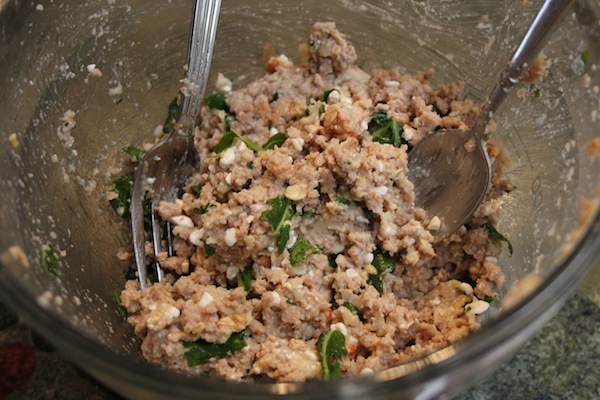 Stuffing them in was easy.  Then I baked them, with plenty of sauce under and over the noodles. 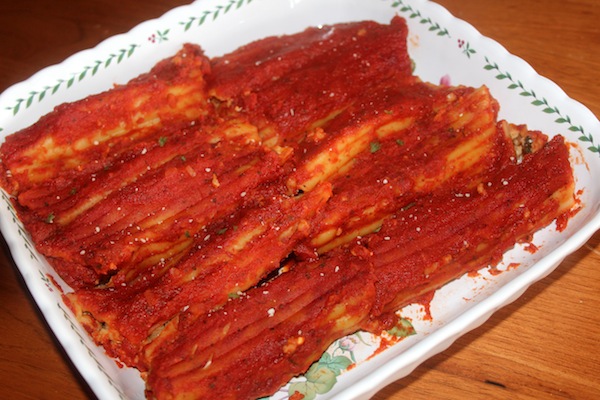 They turned out very tasty, but if I’m honest…I think the noodles were too tough.  Chewy.  And because I kept trying to leave them in just a little longer….they even were burned in a few places.  Oops.

Thus the need to make another batch a few days later.

Sorry family, eating one meal for four straight days may just be your lot in life.  Now go count your blessings.

The second time around, I boiled the noodles, but followed the same recipe otherwise.  Stuffing the noodles was a bit more challenging, but you know—it wasn’t THAT big of a deal.
Typical of me:  Looking for a short cut and I end up having to re-do the entire meal. 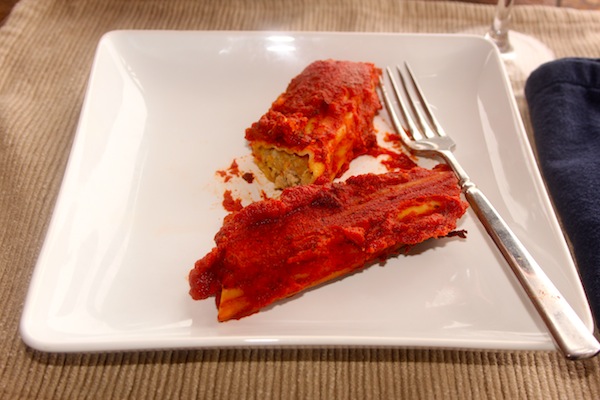 The second time around, I did feel compelled to add some variety.  While experimenting and all.  So, this time I made one batch of turkey-filled manicotti, and one of a cheesy variety.  However, I substituted half of the ricotta cheese with low fat cottage cheese.  And I still snuck the kale in.  Because it’s good for you. 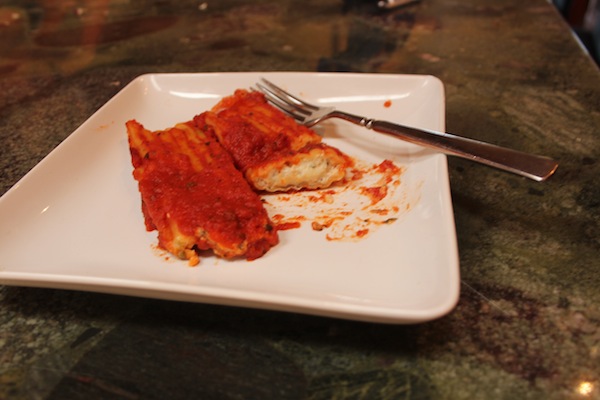 I’m not gonna lie:  I liked the cheesy version best.  In fact, I FELL IN LOVE with it.  Creamy, but light.  Seriously, it will be a new regular feature in my kitchen!

My family voted right down the middle.  They loved both manicottis.  And they agreed the pre-boiled noodles had a better texture.

So, the moral of the story?  Lasagna is in it’s own category.  Cheat all you want with lasagna noodles.
Manicotti however?  Unless you’re my mom, who has magical talents, don’t risk it!  Take the eight extra minutes to gently boil the noodles before stuffing.

Yes, stuffing those suckers is a labor of love, but so is potty training, and teaching long division, and honestly, stuffing noodles might be the easier of the three.  If I had to choose.

Directions:  Saute ground turkey in olive oil until brown.  Mix with the egg, cheese, bread crumbs, oats, parsley, salt and pepper.  Pour half of the sauce in to a baking dish.  Stuff the cooked manicotti with filing.  Arrange in dish and top with remaining sauce.  Bake in a 350 degree oven for 30 minutes.  Let cool for a few minutes before serving.  Sprinkle with parmesan cheese as you like.
Light-Cheese filled Manicotti. (w/ kale.)

Directions:  Combine all ingredients except tomato sauce.  Pour half of the sauce into a baking dish.  Stuff the cooked manicotti with filling.  Arrange in dish nd top with remaining sauce.  Bake in a 350 degree oven for 30 minutes.  Let cool for a few minutes then sprinkle with parmesan cheese to serve.

Hope you try both and love them.  And if you cheat on your noodles–You better speak up so I know that I’m not alone.
What’s your favorite short-cut in the kitchen?