Sooooo….It’s been a long time since I’ve shared a “surf update” around here! Back in the day, I shared a lot of these, and many of you kindly  followed along with them. 😉  I don’t post as often anymore so I’m always hesitant to make things all about us.  But… 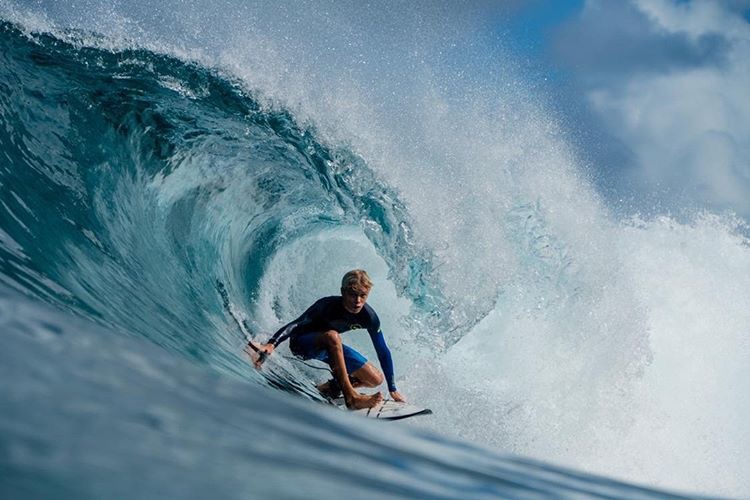 But in the past few weeks a lot of people have asked questions about Luke’s competitive surfing:  About his new sponsors and about his future plans.  And (maybe most importantly) “could he be in the Olympics now that surfing is officially a part of the 2020 Olympics?”  🙂  These are all great questions, so it seems like a good time to share an update post. It’s also a chance to share some epic photos from the past season because Luke makes surfing look really beautiful. 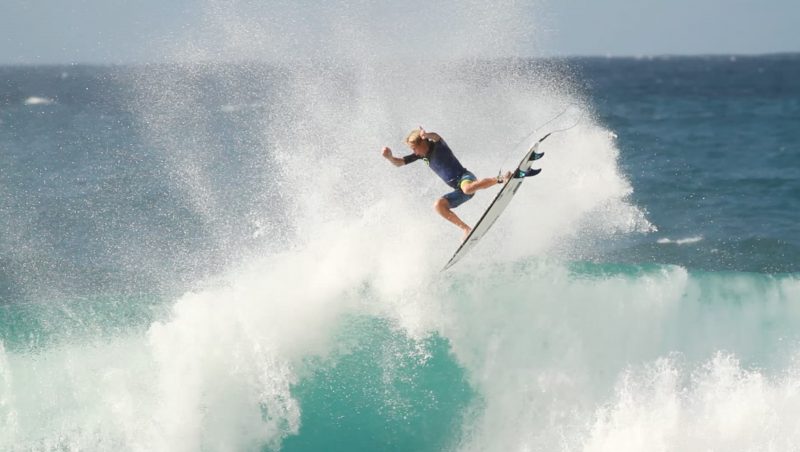 Quick background:  Surfing has been a big part of our life since we moved to Hawaii 18 years ago.  All of our boys started surfing from a very young age.  Dave would take them on a board with him when they were around 4 years old, and by 5-6 all of them could surf small waves.  Dave has spent countless hours in the water with his boys, and is still often out there with Levi, (8.)  Bless him. 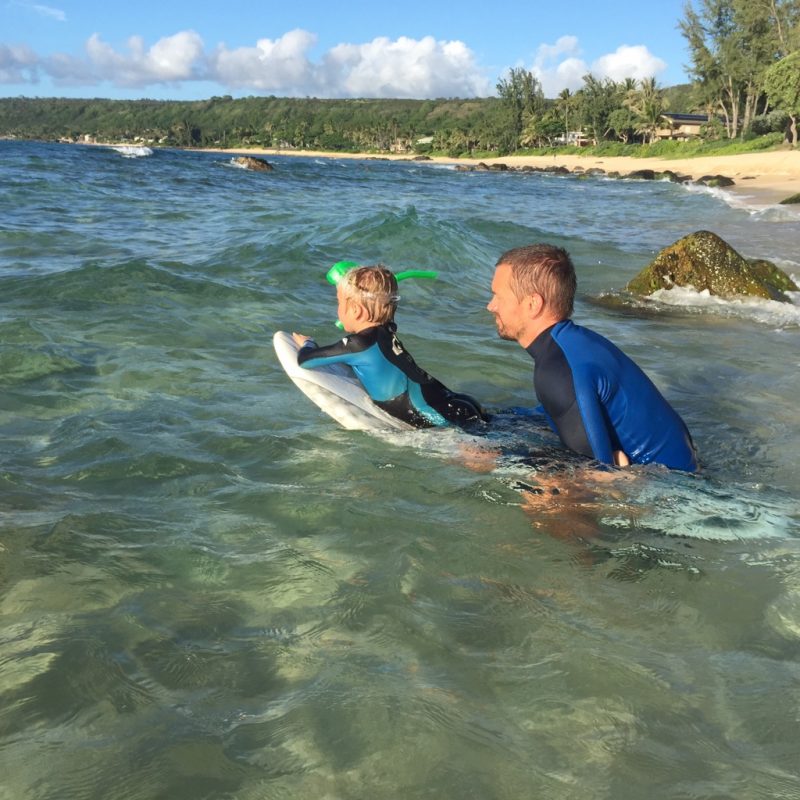 That’s how it starts ^^ Just get them comfortable in the water however you can!  And before you know it… 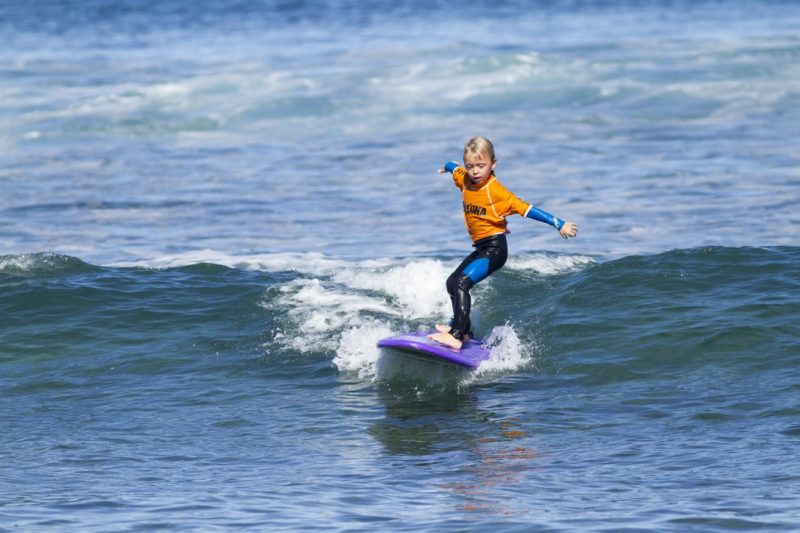 Josiah and Jonah did a bit of competitive surfing, but decided they enjoyed the sport a lot more without the contests.  They both still surf a lot, and Josiah has fallen in love with the surf breaks around Santa Barbara where he is in college.

Luke, on the other hand…took to competition surfing early on.  He loved battling it out, even in the early days when he was losing more than winning.  He began to compete regularly by the time he was 9 or 10 — entering contests all year round in Hawaii and then going to Southern California every summer for National Championships.  He began to dream of being a professional surfer and has trained with that goal in mind ever since. 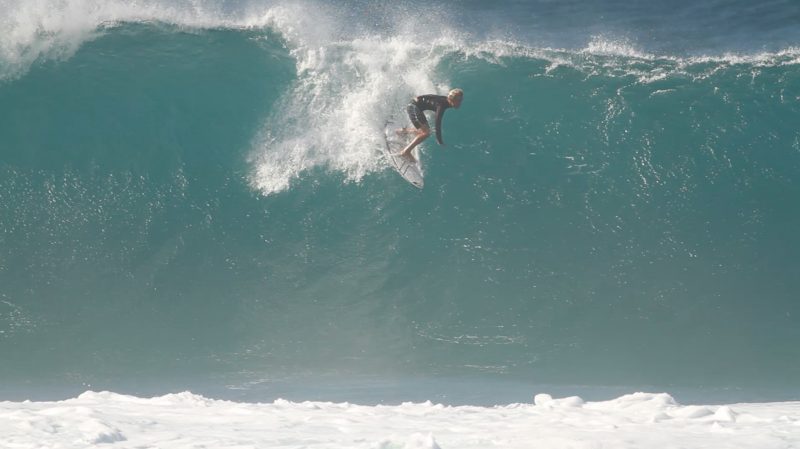 But becoming a pro in any sport is a long journey.  Competitive surfing takes a ton of hard work and grit; a career in surfing is a marathon much more than a sprint.  A kid will only survive if he can roll with things — not getting too up when things are good, or down when they are not.

Luke often wakes up before the sun, when it hurts me to even imagine getting in the water. (Yes, Hawaii is warmer than most places, but early morning water will chill a skinny boy’s bones anywhere.)  He’ll surf for hours and then come home to face a full day of school.  Though he has managed still be a “regular kid” to a large extent, there is no doubt he has sacrificed a lot to pursue his dreams.  And whether or not he accomplishes his goal of becoming a pro, I don’t think Luke will regret any part of the journey.  He has an amazingly positive attitude and he has a fantastic balance of being an intense competitor, and also light-hearted in the midst of it all.  He has a solid faith in God’s plan.  He really loves what he does. 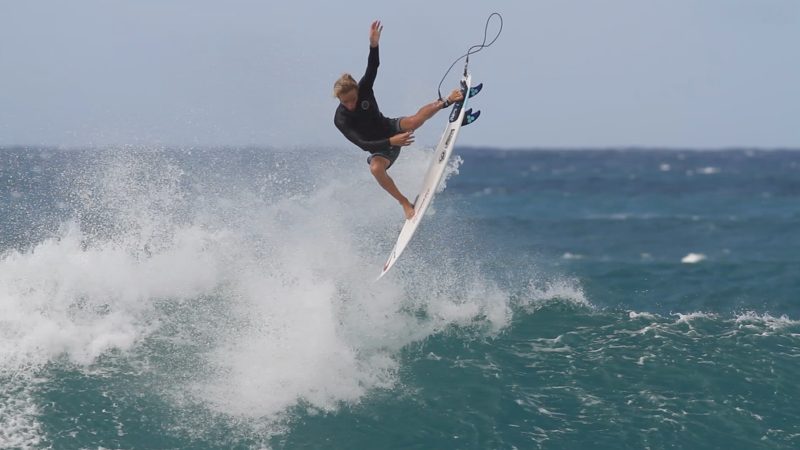 And of course, we love to watch him. 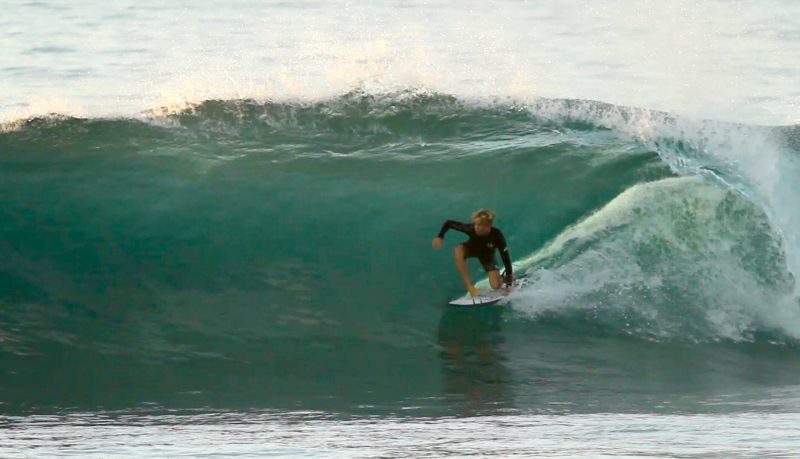 I say all of this to lay a foundation for why we celebrate every little step of Luke’s surfing journey in this family.  It’s kind of a big part of our life around here…

Sponsors and support.  Like many individual sports, part of the journey of being a competitive surfer is that along the way you begin to connect with “sponsors”.  Sponsors are typically surf brands or related companies (from sunscreen to nutrition brands, sunglasses and etc.) who “sponsor” a surfer by giving them free product (and eventually financial support) in exchange for the athlete putting their brand sticker on their board and  generally repping the company well.  This is initially exciting for kids because it affirms their surfing and boosts their confidence.  But down the road sponsors become an actual necessity because competitive surfing gets expensive — from surf contest entry fees to the boards they use, wetsuit and other equipments, and then travel most of all.  So kids who are serious about surfing and proving themselves in the industry strive to move from being “flow riders’ (meaning they get free stuff)  to being in a “contract”,  meaning there is some financial partnership involved.

Some kids have the advantage of knowing people in the surf industry and having some connections that way.  Unfortunate for Luke, Dave and I didn’t grow up in the surf community and we didn’t have any connections to help get him started.  (Sorry, kid! 🙂 ) And though we have more than once dreamed that there was someone out there to pull some strings for him, we’re now really glad that he had to make a name for himself.  Earn everything.  Or, as Dave has always told Luke:

“Let your surfing do the talking.” 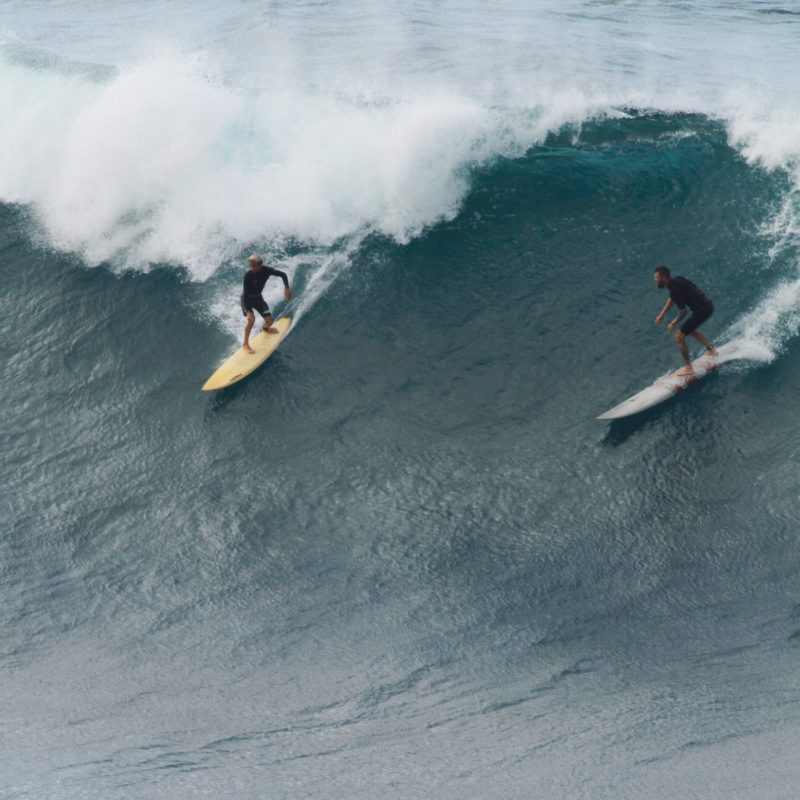 So he did.  He worked hard for his first few competitive years, hoping for any kind of sponsorship.  For a long time there was nothing.  Though he was young it felt like it took forever before something happened.  Then…

Quiksilver:  (Some of you will remember-) when Luke was 11 or 12, someone from Quiksilver reached out to him and invited him to be a team rider.  This was exciting as a first step.  It wasn’t long before other brands reached out to him as well:  Surface Sunscreen, Cobian footwear, Freak Traction, Futures Fins, and others …. and all of these brands have been incredibly helpful (free product is great!)  It’s been tons of fun, and really — how cool that he’s getting anything at such a young age.

But Luke just turned 15 and he is entering the next stage where he needs more support.  Contests have gotten expensive. He goes through about 12-15 surfboards a year now (breaking many of them) and he is now competing in the Pro Jr. tour which means he not only needs to travel to California every summer, but Tahiti each spring.  And other international trips are just on the horizon.  (not to mention the wave pools.  Anyone out there live in Waco?) So he’s been training like crazy  and praying for more support.

Rip Curl reached out wanting to talk contract.  (yes!)  They offered Luke a 2-year contract involving free stuff, plus a bit of help with contests and travel fees.  Also:  an incredibly supportive team who are super stoked on Luke.  We talked to the team coaches here in Hawaii and in California.  We talked to the Quiksilver guys who have become like family.  We prayed a lot.  And we all felt a total peace about moving on.  The Rip Curl guys want to help Luke achieve his dreams and we all agree he is a great fit for their company and brand.

And with that, a contract was signed and Luke has quickly switched out stickers and wetsuits and pretty much his entire wardrobe.

And he’s super excited for all that lies ahead being a Rip Curl Surfer.

(If the video below does not show, try refreshing your page!) *and turn up your volume for full effect…

Channel Islands Surfboards:  The other super fun/exciting thing that happened at just about the same time is that Channel Islands surfboards (out of Carpenteria Ca.) offered to start shaping Luke’s surf boards.  (shaping is the term for building a surf board.)  If you are familiar with the surf industry, you likely know about Channel Islands — their legendary founder Al Merrick, and his son Britt, who is both a board shaper to a few big name pros, and also the head Pastor of Reality Church Carpenteria.  {And to add to his fame, he is married to my friend — author and speaker, Kate Merrick. (who is launching her 2nd book in a few short weeks!  — you’ll hear more about that here soon!) }

Luke loved his local shaper here, but again was thankful to get the support of the biggest shaper in the world. And you can imagine Luke’s stoke when a box arrived with this inside… 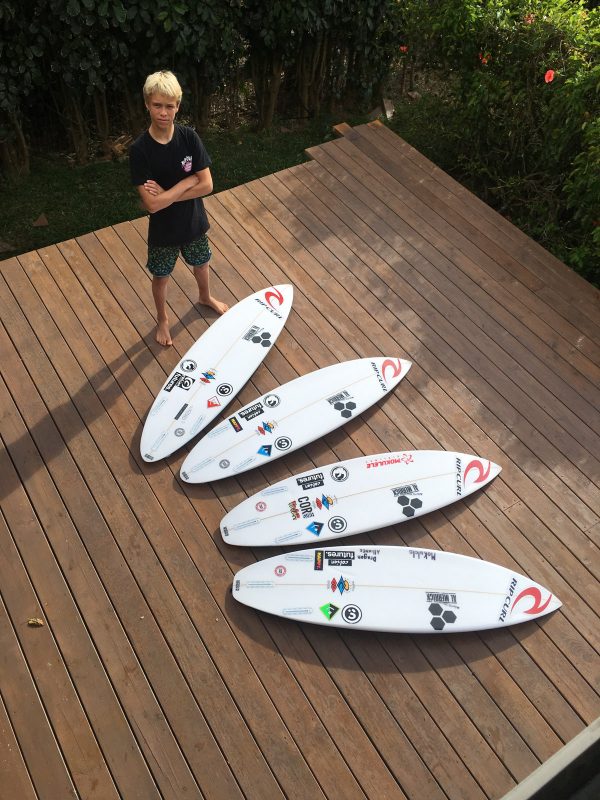 Now for a Crazy Fun Fact:  Our son Josiah actually goes to Britt’s church in Carpenteria.  So now our oldest son’s Pastor is also our 3rd son’s Shaper, and how wild is that?!

Happening now:  As I type this, Luke is away in Tahiti, competing in a couple of contests that are part of the Jr. Pro Tour and Qualifying series for the WSL.  (the World Surf League.)  He’ll take a redeye back on Saturday and go straight from the airport to another contest.  And then his Regional championships happen days later.  Basically we are entering a very busy contest season.

There is no doubt:  Our whole family is super proud of Luke.  When he wins and when he loses, we are always so proud of his hard work and character.  His brothers are his biggest fans which makes me so very happy.   We’re all cheering him on in all he is doing. Yes, he dreams of being a professional surfer, but I’m making sure he keeps his GPA up as well.  I don’t think there is much Luke couldn’t do if he set his mind to it. 🙂

We don’t know — but God knows and that is good enough. 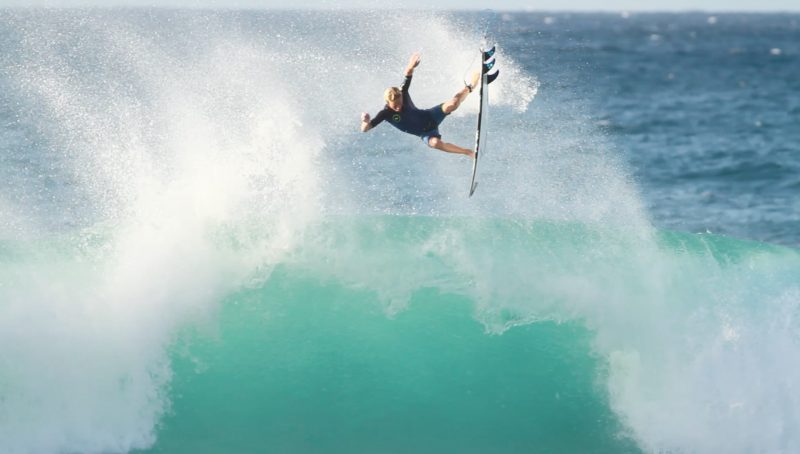 Underneath his carefree surfer image, Luke is a truly thoughtful and wise young man.  He inspires me every day.   In addition to the physical part of his training, Luke has learned the importance of mental training, which I am convinced is a huge part of the equation.  He’s also truly committed to honoring God with his surfing and his whole life.  And nothing he does in or out of the water could make me more proud. 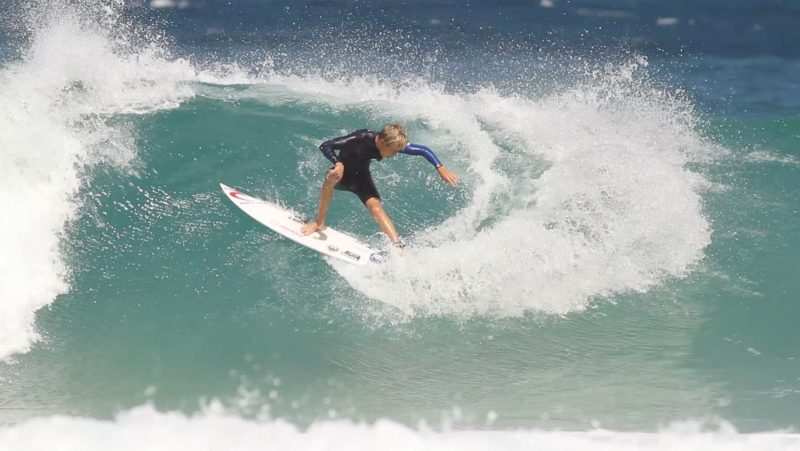 3 books that have been super helpful in Luke’s competitive journey are:

by Scott Hamilton.  (This is so good for anyone!)
Shaken: Discovering Your True Identity in the Midst of Life’s Storms

(Time Tebow is one of our family favorites!)
We’re also all fans of Bethany Hamilton (another RIP CURL sponsored surfer! :)) and this book was an early inspiration to all of my boys:   Soul Surfer: A True Story of Faith, Family, and Fighting to Get Back on the Board

And as for the Olympics?  Well, I can’t make any promises, but that would be really fun, wouldn’t it?  I hope you’ll stick around, regardless — We’ve yet to have a dull moment around here, and as long as you don’t mind I’ll keep sharing (occasional) updates with you as we go.

And there ends my surf update for Winter, 2019.  If you made it this far, you’re either one of our relatives, a surfer yourself, or someone I would call friend.   Thanks for following along!

Did I miss anything?  If you have any questions or thoughts I hope you’ll comment below.  I always love to hear about your kids’ interests and passions as well — whether they are athletes, musicians, poets, chefs, or anything else.  Share away.  Mom bragging fully welcome here! 🙂