You may have read some of my blog posts on the topic of What your Kids Need Most (see the original, and one for elementary and middle school ages.)

Well, after my son learned a most difficult lesson in a golf tournament last weekend, I saw how the experience pointed us to the heart of Easter, and what we all really need most.

I thought I would share the story with you here, with hopes that it might inspire some good conversations with your own children this weekend.  (I’m grateful that Levi gave me permission to share… ❤️) 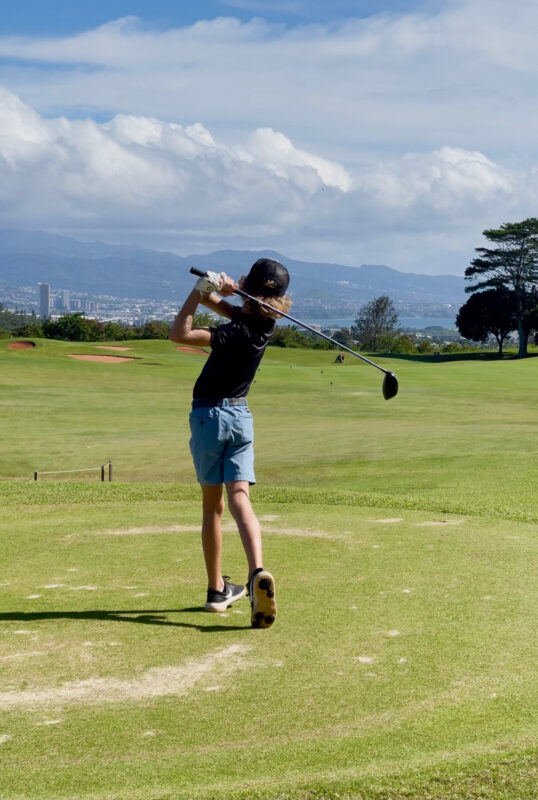 Last weekend…I took my 11-year-old to his first travel golf tournament, on the Big Island (Hawaii). Levi has only been golfing for one year, and though he has done a few tournaments, there is still a lot to learn.  Golf is a meticulous sport, with more rules than I can comprehend. My son has been studying the rule book, and practicing like the obsessed new golfer that he is.  He seems to have a natural swing and he is most certainly committed. 😉 We are proud of him.

The Big Island tournament was unique from any he has done, because they send the 10-11 year-olds out to play 18 holes with no adult supervision.  The kids are left to keep their own and each 0ther’s scores.  Someone from the tournament  would pop in every 3rd hole to check on the kids and gather scores to post online. Otherwise, the kids were on their own.

It was a special weekend away, just the two of us. The first day of the tournament went well.  It was hot out there — and 18 holes in the middle of lava fields had to be sweltering. But Levi held his own, keeping his scores in the top four, which Dave and I found impressive.

Sunday he was pumped up and ready to finish strong.  I dropped him off, again, sweating in the few moments of walking out to watch him tee off (the only thing parents were allowed to do.) Then I snuck away to find an air-conditioned place to do some quiet work and check Levi’s scores online.

Finally, after hours had passed, I made my way back to greet Levi as he finished his 18th hole.  Dave and I had seen online that his scores were not as good for the 2nd half of the 18 holes. I prepared myself for his disappointment.  But I was not prepared for what happened when Levi walked up to me, unable to hold back the tears, unable to put words together without losing it.

But he had to hold it together, because next, he sat at a table with the two boys from his group and the Tournament Director. I stood back and waited, trying to figure out what was going on.

Moments passed.  My husband called me repeatedly and I just said, “I have no idea what happened. I will get back to you.” Finally, Levi made his way over to me and he turned away from the other kids as the words spilled out through tears:  “I was disqualified. None of my scores count. I got a ZERO. All of this was for nothing!”

I waited for the rest of the story.

Eventually, when he could gather his breath and his words, Levi explained that on the 12th hole, he had putted his ball up to about an inch from the hole. Without thinking, he did what he often does when he is playing golf for fun, with his brother or with his dad…He picked up his ball, considering it a “gimme.”  As soon as he did, the other two boys spoke up with, “Um, that was not ok…” and at that moment it struck Levi that he had just made a big blunder. “WHAT WAS I THINKING?!”

He wasn’t trying to cheat or do anything to break a rule.  He was just a spaced out 11-year old.

The boys were unsure of the protocol in this situation, so they played on until someone from the tournament stopped by to check on them and gather scores.  The three boys all told the man what had happened, and he said he would let the director know.  “It may be a disqualification” he warned Levi.

Fear filled Levi’s mind as he tried to continue his game.  He sorely regretted his sloppy habit, and wished he could redo that hole. But he couldn’t. Then, when he came in at the end, he sat down at that table with the tournament Director and the two boys.  And the director confirmed that his infraction indeed cost him the tournament.
“I’m sorry”, the man said, “It’s happened to me more times than I can count.  But rules are rules.”

Levi held it together the best he could as the group took photos and congratulated one another. 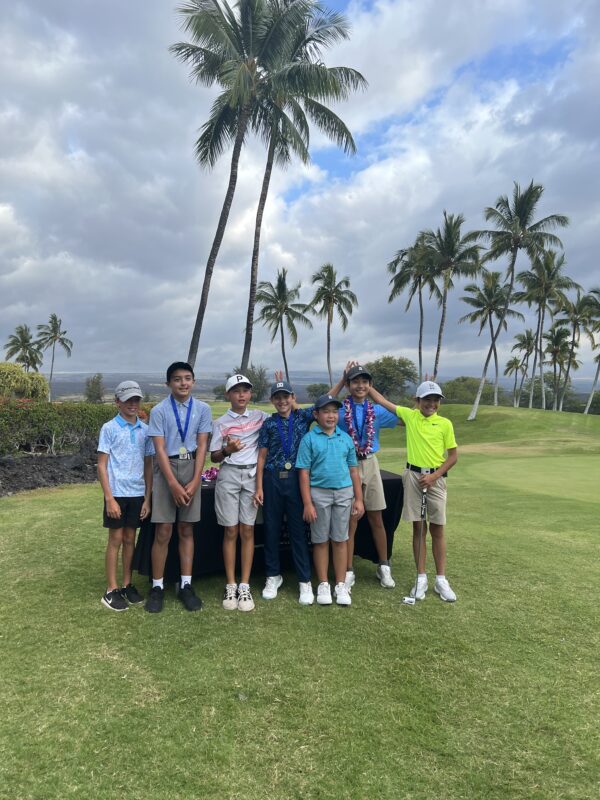 We had to move quickly to our car as we had to catch our flight back to Oahu. Once in the car,  the weight of the situation fell on Levi even harder. It was a miserable ending to what started out as a really fun weekend.

As I drove quietly, trying to be the mom Levi needed, it occurred to me afresh that it was Palm Sunday, the start of Holy Week.

My mind flashed back to the Tournament Director sitting at the table, announcing Levi’s fate: Disqualification. Rules are rules, he had said. And truly, I am glad for sports that have rules and consequences.  They prepare kids for the realities of life ahead.  As much as I wished Levi could have a warning or a second chance, the Director only did his job.  If he had not given Levi the consequences he deserved, he would not have been a fair judge. He did exactly what he should have done.

I thought then of God, and how we will all sit at his table— or more like, before His Throne — one day.  He, too, will have knowledge of how we played the games of our lives.  Every good score. Every birdie, bogie, the mindless “gimmes’ and…every single penalty.  And because God is Holy and Righteous, He cannot tolerate even one sin.  One infraction separates us from him.

And oh how many infractions are on my life score card?  Every.  Single. Day.

So, because He is a fair and Righteous Judge, God’s only proper response to our mistakes ought to be a disqualification. He has every right to zero me out.  To count none of my good deeds.  To say, “Sorry but rules are rules.  And unfortunately, you…failed.”  I would have no grounds to argue if He chose to do that.

But that is not the story of Easter.

I told Levi to imagine: what if Tiger Woods (or more currently, Scottie Scheffler- who just won the Master’s) had shown up at that table, and said “I know this kid messed up, but I want to take his penalty.  Disqualify me!  And even more — give Levi my points.  I’m a really good golfer. I’ll trade my perfect score for Levi’s zero.”

Jesus, who has a perfect score, came to earth to pay the price that we could never ever pay.  He took our penalties and disqualifications, and put them on Himself.  And in exchange, he handed us the gift of forgiveness, grace, and eternal life.

I shared all of this with Levi, who, though still bummed about his golf tournament, connected to the message of grace.  We agreed then that golf is a tough sport. That we wished he could have a do-over, but we are also glad for fair judges and rules that everyone has to abide by. Standards that must be met.

I suggested that one day he might even look back on this weekend and laugh a little. (It was too soon for that. My bad. 😉 )

But even more, we talked about the amazing God we know, who also sets standards which must be met. Standards none of us can ever meet. Yet, a God who loves us so much, He found a way to be both fully just, and fully loving. He sent Jesus.

And through our disappointment and tears, together we prayed a prayer of thanks…For hard lessons and more chances to play golf in the future. And most of all, for Jesus’ payment for our sins, and His gift which is even better than a perfect score on 18 holes.

Oh what a Savior He is!

Perhaps you can use a sport or activity that your kids are familiar with to bring home the Easter message this weekend. Because Easter egg hunts are fun, and candy is yummy, but what our kids need most is a relationship with God…Salvation through grace! 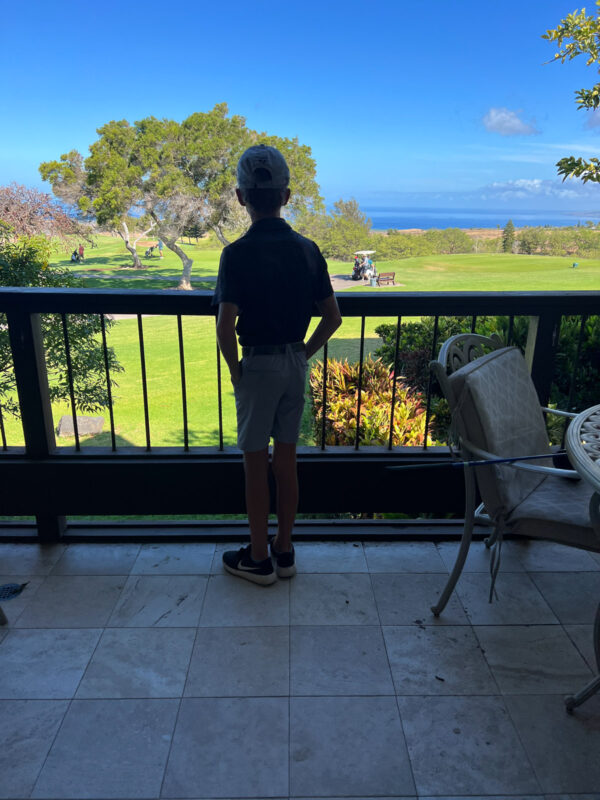 Ephesians 2:8-9 “For it is by grace you have been saved, through faith—and this is not from yourselves, it is the gift of God— not by works, so that no one can boast.”

Have a wonderful Easter weekend!