There are a whole lot of terrible childhood diseases out there, but one of them at the top of the list is Duchenne Muscular Dystrophy.  My heart aches even typing the words.  I hope you’ll take time to read two parts of the story of why this disease is so close to my heart. 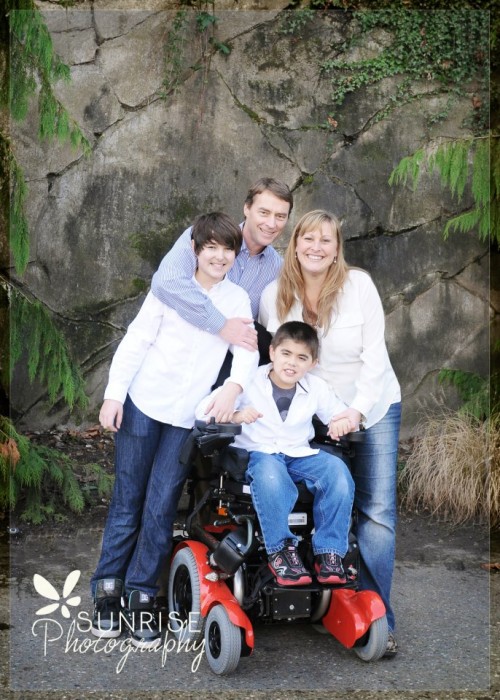 I’ve mentioned before that my nephew Micah has Duchenne Muscular Dystrophy.  I wouldn’t expect you to know much about the disease unless you have been personally affected by it, so I thought I would share a little more about the disease and how it has impacted our family.  I will share more about that in Part Two following this post.  I will also talk a little about the research that is being done, as well as how this relates to my running the NYC Marathon.

TODAY I want to share the story of Micah, and how he came into our family.  His story begins here in Hawaii, and I think after reading this, you’ll understand why I feel so very connected to my nephew, and the cause of ENDING DUCHENNE.

My brother Lance and his wife Janelle had tried to have children for some years before deciding that God might be leading them to adoption.  They had a unique situation come up locally, and were able to adopt a beautiful son the same year Josiah was born (14 years ago.)  They named him Brayden.  They fell deeply in love with their son, and quickly became huge advocates for adoption.  Lance and Janelle were excited as they considered adopting another baby.

During this time I had a friend here in Hawaii whose teenage daughter had become pregnant.  It was a unique situation, because the daughter herself was adopted–from Taiwan, and our friends–her parents, didn’t know much about her biological parents.  What they did know was that this teenage pregnant daughter was mentally delayed, and struggled with other social/emotional issues.  They were suspicious that the girls problems were related to abuse before she was adopted–when she was just an infant, but they had no way of knowing.

With a a child-like mentality, this teenage girl had been lured out of her home by an internet predator, and became pregnant.

I mentioned the situation to my brother, who felt compassion for the family, and the girl, but responded honestly that he wasn’t sure that they were “called” to special needs children.  I fully understood that.  He said that they would pray, and we left it at that.  The thing with this teenage pregnant girl, was that no one knew what her baby would be like.  It may very well be a perfectly healthy, “normal” baby.  But there were unknowns, and that had to be considered.

The parents of this teenage girl began looking for the best fit for a family to adopt her daughter’s baby.  It was clear that the girl herself would not be fit to raise the baby, but they believed that God created this baby for a purpose, and that God had a family in mind that would be the perfect fit for this child.  My brother and his wife sent in some information, though hesitantly, and then put the thoughts on the shelf as they heard that the girls parents were really hoping to find a family here in Hawaii to adopt the baby.

My brother and his wife continued to research foreign and local adoptions, and prayed for God’s will.

Then, one summer morning, VERY early, (I’m pretty sure it was three or four A.M.) I was awoken by a phone call.  My friend was on the mainland, and her daughter had gone into labor, six weeks early!  She didn’t know what to do, and they had not yet chosen a family to be the adoptive parents.  She didn’t even have contact information for my brother with her, but asked me if I could get in touch.  After considering a number of families, their hearts were most drawn to my brother’s family.

I remember rubbing my eyes trying to wake up and realize the gravity of this situation.  A baby was about to be born.  We had all prayed.  I knew God had the parents picked out already, but who?  Would my brother and his wife even be open to the risks and unknowns?  What should I do?

I immediately called my sister-in-law, and told her the news.  I don’t remember the conversation at all, but I do remember getting a call back within an hour.  She had talked to Lance, and they had no doubts:  My sister-in-law, along with my mother, were headed to the airport, and would be there shortly after the baby was born.  There were no promises, and no guarantees, but they knew they had to come.

By the end of the day, Janelle and my mom were here in Hawaii, holding a beautiful baby boy.  The first thing we all said was how much he looked like their first son, Brayden. The baby had to remain in the Premie baby unit for the next week or two, during which time my mom and Janelle stayed in a hotel, and spent most of their days visiting the baby in the hospital.  They took care of the vulnerable little guy, and also got to know the mom a little bit.  Everyone was praying, and her friends and family back home were both helping with her son Brayden (just two,) and standing with them in faith that God’s will would be done.

There were a few moments where the birth mom began to say she changed her mind.  She wanted to raise the baby.  We were concerned that this would become challenging.  The birth mother’s parents however were incredibly helpful, and during that time Janelle got to know them well.  Their hearts were all knit like family.

Finally, in God’s perfect timing, the birth-mom decided to give her baby the best home possible.  She officially chose Lance and Janelle to be the legal parents of her baby, and asked that they would send photos of him each year, and keep in touch with her as the baby grew up.  She also requested that he be given the middle name “David.”  (Kawika in Hawaiian.)  Lance and Janelle chose to give him the first name, Micah.  The healthy baby was released from the hospital, and an overwhelmed Janelle and her mother-in-law boarded a plane to bring their new baby home.

The family was now complete, and though they were dealing with a premature baby with a few special needs, they rejoiced that this child appeared to be perfectly healthy.  They knew that they were right in the middle of God’s will.  There was nothing that would lead them to be concerned about anything, especially something as tragic and life-altering as Muscular Dystrophy.  This led them into a couple of amazing years of enjoying their sons, before the world they knew would be forever turned upside down.