I’ve had a lot of people ask me about my husband, Dave:  (What kind of doctor is he?  What is he like?  Is he on Facebook?  Etc…)  Well, here’s ten things about Dave…kindly listed so you can read what interests you. 🙂

1.  Where he came from:  Dave was born and raised in Oregon, but felt like Hawaii was home years before we moved here.  (A little more about that on THIS page.)

Growing up in a quiet, small town, he always had a love for nature and wildlife.

Example:  Back in elementary school, Dave would get up in the wee hours of the morning and go bird watching.  Alone.  He kept a journal of migration patterns and other observations in nature.
And then he’d go home and sketch pen and ink drawings of the birds, and sell them in art galleries.  Really.

Yeah, he was one of those.
(Never ask what I was interested in around that same age…Unless watching the Jetsons and collecting sticker albums impresses you.)

But, at the same time Dave was an incredible athlete, excelling in soccer and passionate about windsurfing, even in the cold waters of the Oregon Coast (and the Columbia Gorge.)

2.  Early Faith:  Dave was raised in a Christian home, but had a lot of questions and a very inquisitive mind even from a young age.  His parent’s encouraged him to ask questions and he did, concluding that he too wanted to follow God.  He stayed very close to the Lord all of his years growing up.  Dave was wise and thoughtful, which helped him make good choices and avoid a lot of trouble.

3.  College:  Dave went on to play soccer (and get an education,) at Seattle Pacific University.  He actually began at SPU on a partial ART scholarship, but switched part way through and graduated with a degree in Biology.  After that he took a few years off of school to do youth ministry, coach soccer, and play on a little professional soccer team in Oregon.  He also went windsurfing every chance he got.

4.  ME, and MEDICAL SCHOOL:  That’s about when we met.  And soon after married.  (God both loved me, and had a sense of humor–we were very different!)

Just over a year later, Dave started medical school at Oregon Health Sciences University.  He studied hard, but honestly–I don’t remember it being THAT brutal.  He’s the kind of guy that studies something and then never (ever!) forgets it.  (Total opposite of me.)  After four years, he chose to specialize in Family Practice, and then had to pick his top choices for a residency training program.  The program at University of Hawaii was his top choice, and they chose him as well.  So in 2001 we moved to  Oahu where he began a three-year Family Practice Residency program.

5a.  HOSPITALIST start:  When that program ended, Dave had the chance to work as a Hospitalist at Pali Momi Hospital.  Though he had originally planned to pursue a fellowship in Sports Medicine, Dave took the position to see how he would like it.

5b. (Definition, HOSPITALIST.)   What is a HOSPITALIST?   A Hospitalist is a doctor who does in-patient care in a hospital.  They take patients from the Emergency Department who need to be admitted to the hospital, then manage all care during their stay in the hospital.  This takes the strain off of the family doctor who (“in the old days” as I always say,) would have to make rounds on their patients who were hospitalized, as well as see patients in the clinic.  Now a team of Hospital-based Doctors work full time in the hospital managing all of the people who are staying IN the hospital.  Did that make sense?

5c. HOSPITALIST now:  Anyways, this Hospitalist position turned out to fit Dave extremely well.  There is a bit more intensity (aka adrenaline rush) as a Hospitalist than most Family Doctors experience, and to be honest, I had been a little worried that he might be bored as a Family Doctor.  This is also a great match for Dave as he doesn’t have to manage an office, have a staff etc.  He works independently.  His schedule works well with our homeschool family, as he works a few weeks straight without a day off, (still coming home in the afternoon/evenings) then has a nice block of time off of work.

6.  FREE TIME:  When he isn’t working, Dave is often on the tractor making our property into something beautiful that he has in his mind (I’m not sure yet…) He also invests a lot of time into running kids to beaches and skate parks, and hiking, throwing balls, or playing with the boys.  Dave is involved with church, but considers his biggest ministry his involvement in our boys’ lives right now.   Dave is very smart, and seems to keep up on things (like sports teams, politics, and other current events,) even though I rarely see him reading a paper or watching the news…I have no idea when or where he gets his information, but I’ve pretty well given up on trying to figure it out.  He’s just like that.

7.  OTHER STUFF.  Dave still loves art, but rarely puts time into it.  I hope he goes back to that one day.   He is also a gifted musician (guitar, ukulele, and sings,) and, quite frankly— does well at everything he tries.
Clearly, life isn’t fair.

8.  SOCIAL NETWORKING:  Dave is not on Facebook, Twitter, or any other form of social networking.  He forgets his cell phone at home half of the time, and he goes days without checking messages.  He doesn’t understand why anyone would write a blog, and still doesn’t totally understand what a blog is, but he supports my blogging habits because he knows it makes me happy.  (And because I promise not to talk about him too much.  :))

9.  A FEW MORE DETAILS:  Dave is a quiet guy, who doesn’t need a lot of people, but will talk to you all day once you start talking. (Especially if you like to talk about soccer, surfing, tractors, or the Lord.)  Since I come from a rather loud family, my mom has teased that she can often find Dave in our family gatherings sitting in a quiet place strumming his ukulele.  haha.)

Dave is faithful, honest, and patient.   He has a great sense of humor, but he is even quiet about that.  I like to make it my goal to pull it out of him…

I am so blessed to be married to someone so very different from me, who keeps me grounded and balances me so well.  Oh, and speaking of how different we are, our friend Greg wrote a post at his blog, with some very cool observations about our marriage, after he visited us from Australia this summer.  You can read that post HERE.  (We were incredibly humbled by his writing.)

10.  PHOTOS:  How about a couple photos to show you a bit more of Dave?

This one makes me realize how long we have been taking the boys to the beach…It had to be about five years ago.  Dave gets so stoked to see his boys loving the water. 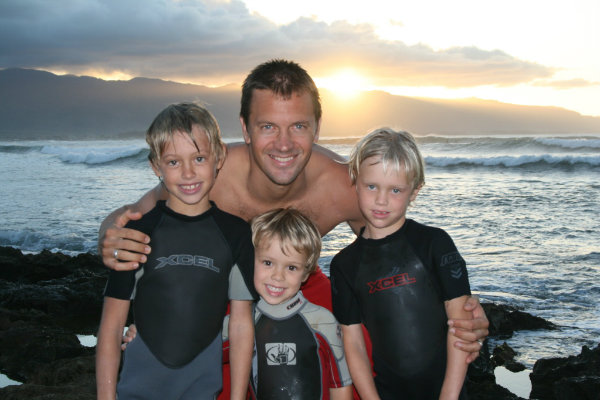 I don’t think I’ve mentioned Dave’s love for his dogs..Oscar and Lulu. 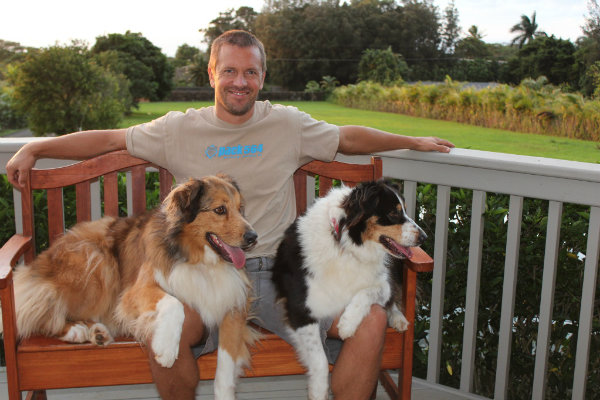 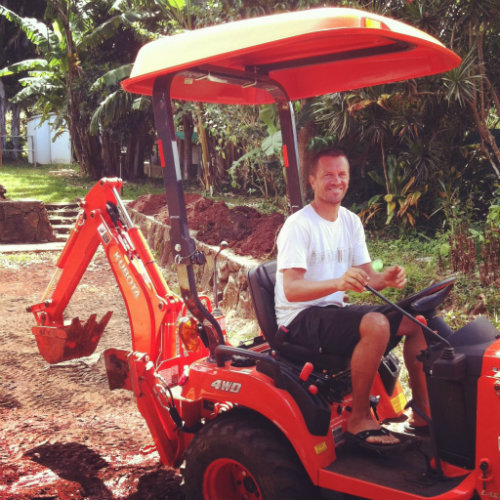 Here’s a photo of Dave with his parents in Oregon.  I give these two HUGE credit for raising him to be the incredible man that he is.  (And check it out–here they are mid-70’s killing it–in style–on the tennis court!) 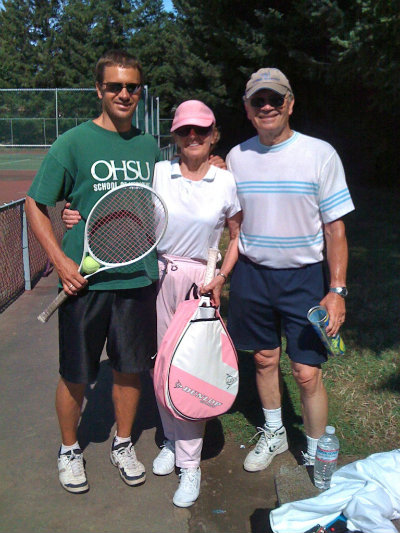 Our fourth son has been pretty extra-special to Dave… 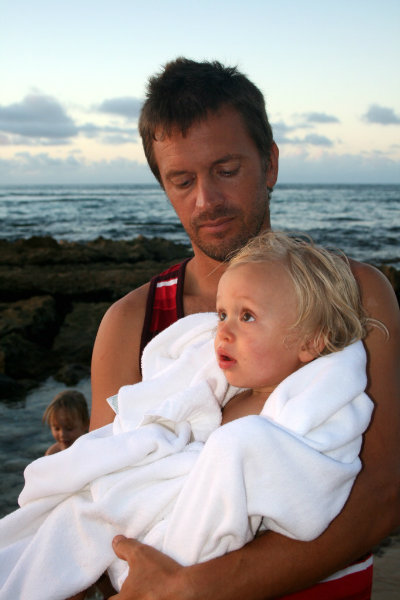 And one more with his little buddy.  My heart melts. 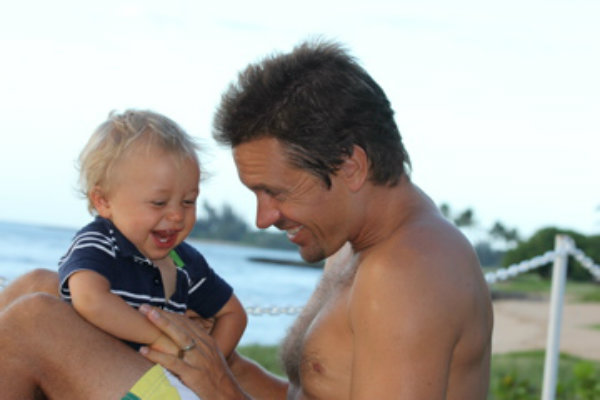 Finally, my forever beach-boyfriend…Who I love to play with, parent with, and share life with. 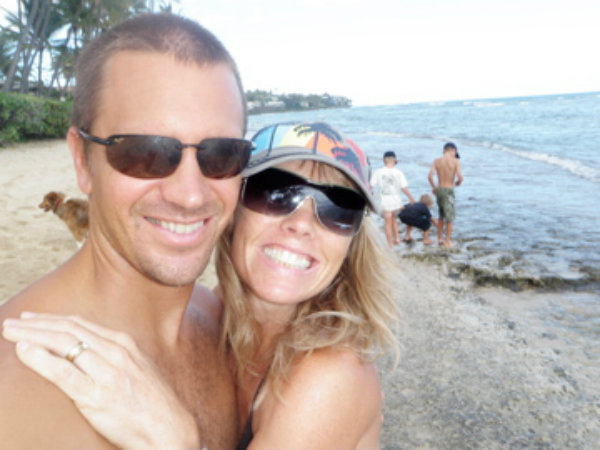 I am completely humbled by God’s goodness in giving me such a wonderful guy.  (Even if he is 12 shades darker than I am.  Notice my WHITE hand on his shoulder.  *Gasp*)
Thanks for tuning in guys!
Let me know if I missed anything.